Home » News » Sebastian Korda on hitting with Graf: Her forehand was just killing me!

Sebastian Korda on hitting with Graf: Her forehand was just killing me! 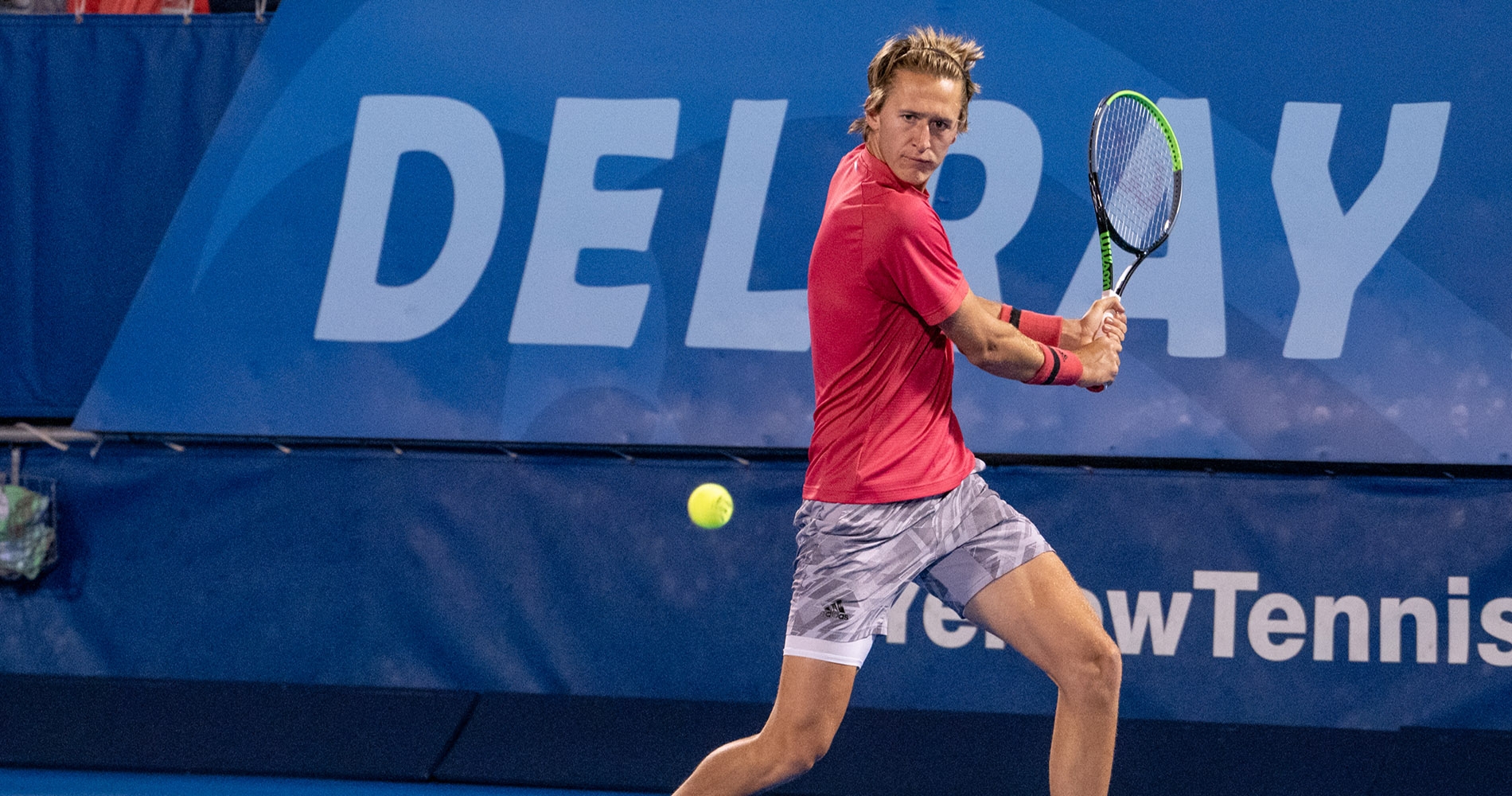 DELRAY BEACH, FL – JANUARY 9: Sebastian Korda (USA) competes during the second round of singles at the ATP Delray Beach Open on January 9, 2021 at the Delray Beach Stadium & Tennis Center in Delray Beach, Florida

Sebastian Korda has entertained reporters all week at the Delray Beach Open with tales of his two week trip to Las Vegas, where he hit with Andre Agassi and even broke bread with the American legend over numerous dinners.

Tonight, after reaching his first career ATP semi-final with a 6-3, 4-6, 6-3 victory over American John Isner, the 20-year-old talked about another, more humbling part of his Agassi experience: dealing with the legendary forehand of 22-time Grand Slam champion Steffi Graf.

“I was on court a couple of times with Steffi, I didn’t want to play with her, I was way too intimidated by her,” Korda told a reporter during his virtual press conference. “Her forehand crosscourt was just killing me so I was like ‘I can’t do this anymore.’”

Korda, a soft-spoken and eminently polite young man with a healthy respect for his elders, says he was blown away not just by the game of Graf. It was also her energy.

“She was incredible, she would give me some tips on the court and the energy that she brings every single day, you just knew that she was such a competitor, she’d get mad at herself when she missed, she would skyrocket, it was awesome to see her on court, it was super special.”

Whatever happens in Vegas is known to stay in Vegas but in this case, Korda’s confidence is being felt on the east coast of the USA this week. It was apparent that he was oozing self-belief tonight in Florida, as he engineered a late break against one of the biggest servers in the history of the sport and then rallied from 0-40 down while serving for the match to clinch off the hard-fought win over the world No 25.

Isner, for one, was impressed with Korda’s game – and his confidence.

“He’s a good player,” the American said. “I think tonight in particular I think he was just a little bit better than I was. It was sort of an uphill battle for me. He came up with the goods for sure, came up with some good returns and fought his way out of that last game as well, that was the best return game I played the whole match and I just didn’t get paid off.”

The American was later asked if he could sense a difference in Korda today, compared to their only previous meeting, which occurred last October at Roland-Garros.

“It’s not necessarily a tangible thing but he’s grown in confidence, that’s the most important thing, there’s no doubt about that. It’s not so much, ‘Oh, he hit his forehand tonight better than he did in Paris.’ It’s just that he’s more confident and he believes that he belongs as a top player on the ATP Tour. Once you sort of gain that belief it can take you a long way.”

THIS IS WHAT IT MEANS TO HIM 🙌

Sebastian Korda is through to the semifinals of the @DelrayBeachOpen after upsetting No. 2 seed John Isner 6-3, 4-6, 6-3!#TeamUSATennis pic.twitter.com/YXKer44qGL

Racing up the rankings, but not in a hurry

Korda will face Cameron Norrie for a spot in his first ATP final on Tuesday at Delray Beach. If he comes away with the title in Florida, he’ll be in line for a Top 100 debut next week. But for the American, it’s not such a big deal. He’s just happy playing his game and gaining experience on the tour at the moment. He’s not surprised by his success, and he’s not in a hurry to shake up the world. All in due time.

“I wouldn’t say surprised but I would say it’s definitely super rewarding for me, my first semi-final in my [third] ATP tournament so it’s awesome for me,” Korda said.

And what are his goals?

“For me, just keep building, how I’m building my body, and keep playing these good matches and practicing with these bigger guys. That has been my goal this year. I’d say just getting comfortable playing around here, playing with fans, just a bunch of little things that are kind of my goals, just keep being positive and keep putting in the hard work, it’s such a long road ahead. I’m 20 years old and hopefully I can play tennis for ten, fifteen-plus years, it’s a long road and I’m in no hurry.”