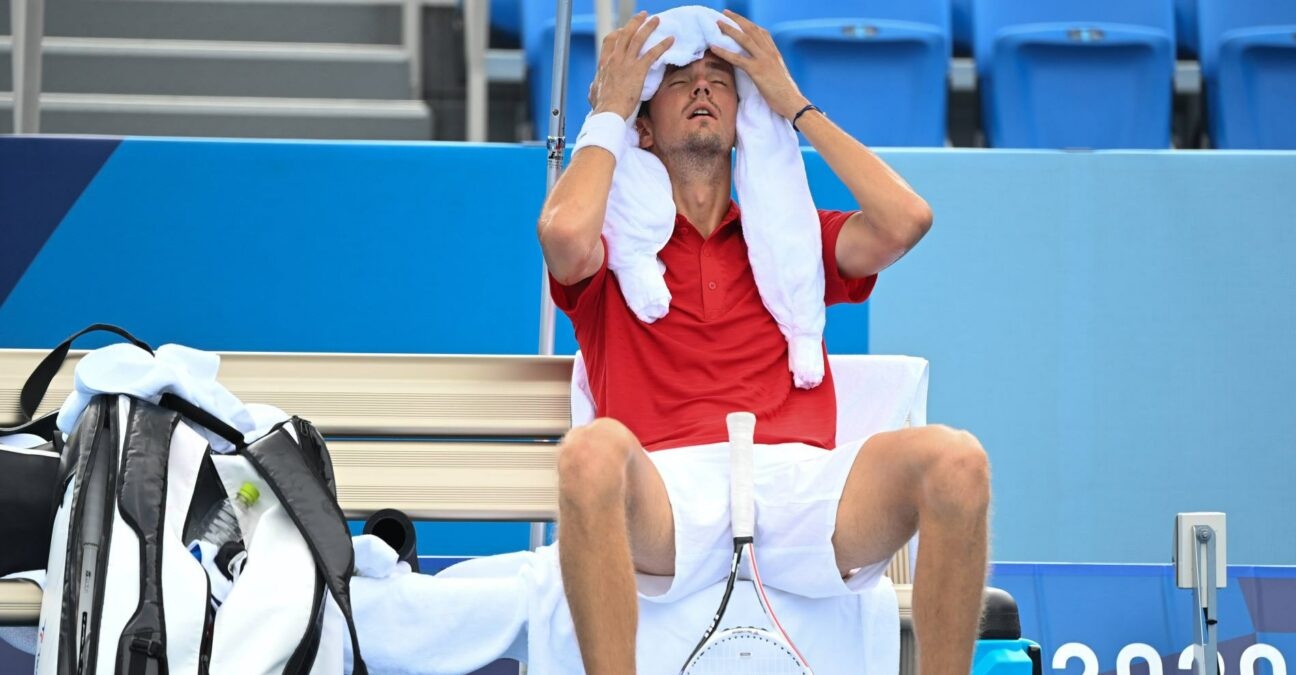 It took four days but the International Tennis Federation finally bowed to player pressure – and used common sense – as they confirmed on Wednesday that start times will be delayed to 3pm local time for the rest of the Olympic Games to avoid the most intense heat of the day.

Heat and humidity made life difficult for players right from the start in Tokyo and though the heat rule was instigated – allowing players a 10-ninute break after the second set – but increased humidity in the city and more problems for players saw the ITF finally announce on Wednesday that they would be making changes for the rest of the event.

Medvedev: “I can finish, but I can die”

Novak Djokovic and Daniil Medvedev were the most vocal in their complaints, Djokovic asking from day one for matches to be delayed and Medvedev telling the umpire, during his third-round win on Wednesday, that his life was at risk.

The Russian, whose endurance and stamina are among his best traits, battled injury, cramp, fatigue and the heat itself and admitted he’d struggled throughout.

“I can finish the match but I can die,” Russian Medvedev told umpire Carlos Ramos. And when asked how he was, he said: “I’m fine. If I die, will the ITF take responsibility?”

Later, he explained how he had been feeling in the humidity. “Even from the first set I didn’t feel good enough with my breathing. That’s why I called the physio – I felt like my diaphragm was blocked,” he said. “And then on the second set, I just had darkness in my eyes, like between every point. I didn’t know what to do to feel better. Like I was bending over and I couldn’t get my breath together so I was ready to just fall down on the court.”

Heat gets better of Paola Badosa

The changes to the start times will help Medevdev and others but for Paula Badosa, the adjustments will come too late.

The Spaniard, who had looked so good in reaching the quarter-finals, wilted in the heat and lasted just one set of her match with Marketa Vondrousova before calling it a day. The decision was a wise one – she left the court in a wheelchair – and she was left wondering what might have been.

“It’s a shame to end my participation in this way,” she said. “It’s been a tough ask since day one. We tried to adapt as best we could but today my body hasn’t held up as it needed to,” she said.

Why did it take so long to change?

The big question is why it took so long for the ITF to make the change. The heat rule – which allows the break between the second and third set – has been in place for many years, but it is always a bone of contention, no one really knowing at what point it is hot enough or humid enough to trigger it.

Djokovic had outlined, in great detail, how difficult the conditions were as early as the weekend, when he and others found like incredibly difficult.

“You feel you have weights on your shoulders because there’s so much heat and humidity and stagnated air,” the world No 1 said. “You don’t feel yourself, you feel slow with your legs. It’s not the first time we get to experience tough conditions. I spoke to a couple of guys in the locker room and all of them said this is the toughest that they have experienced day to day.

“I don’t really get why ITF doesn’t want to move the matches.”

The ITF said it had given “great consideration” to the 11am start but on Thursday, common sense prevailed and the players were clearly happy.