Home » News » The WTA: how women got their revenge and their rights

The WTA: how women got their revenge and their rights

In the final episode of our trilogy about the roots of tennis’ divided governance, Tennis Majors looks back to when the WTA Tour was formed and how the women proceeded to earn parity with the men who rejected them and lead the fight for equality in women’s sport 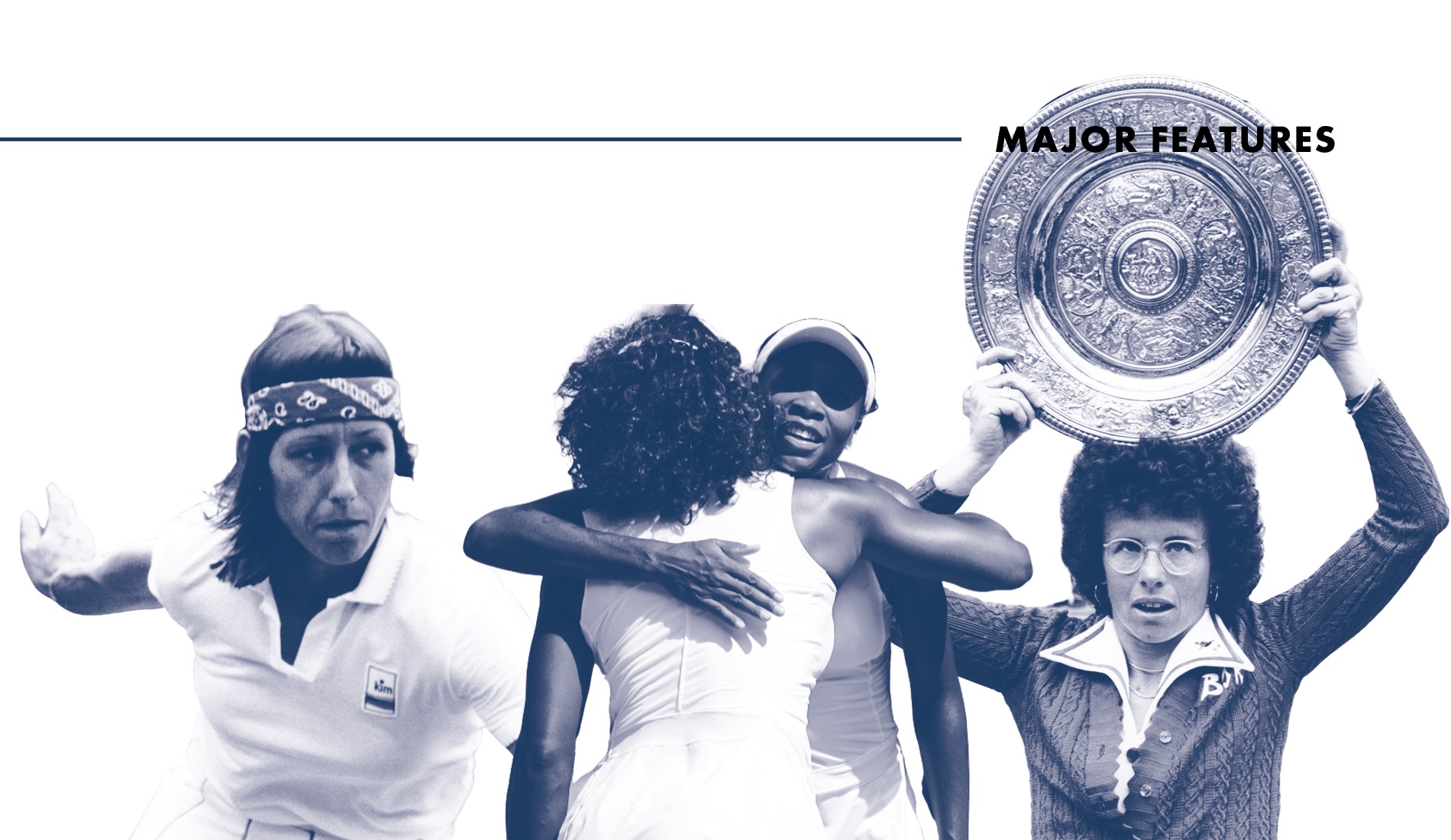 Let apart by men who did not belive in themselves, women had to fight to make their own tennis tour growing.

$4.42 million. By winning the WTA Masters in Shenzhen last December, world No 1 Ash Barty won the biggest winner’s cheque in the history of tennis, men or women. In 2019 alone, 44 players won more than 1 million euros in prize money on the WTA Tour, a far cry from the early 1970s when the world’s best players, led by Billie Jean King, had to hand out tickets in front of the stadium and promote their own matches as part of their newly created Tour.

From those first steps in Houston in 1970 to the current WTA Tour, with tournaments in 33 countries and total prize money of $139 million (in 2018); from a prize pot 10 times lower than the men at the Grand Slams in 1970 to parity in 2007 and ever since, women’s tennis has become (almost) the equal of its male counterpart. And they did it themselves, which also explains why their governance is still independent today.

When the women created their own circuit in 1970, they did so because men did not believe in their marketing potential. They took a resounding revenge on these men thanks to the leadership of female players who, beyond tennis, fought for women’s rights.

“You’re not supposed to earn a living”

The advent of the Open era allowed a few women to rub shoulders with professionalism. Americans Billie Jean King and Rosie Casals, Briton Ann Jones and French Françoise Durr signed a $20,000 contract in 1968 to play exhibitions, for two years, alongside the so-called “Handsome Eight”, the players behind the men’s World Championship of Tennis.

“We played on the fringe of men’s tennis. We were treated very well, they respected us,” Dürr, the winner at Roland-Garros in 1967, 33 years before Mary Pierce, the last French winner of their home Grand Slam event.

But the men, at that time galvanised by the development of their circuits, didn’t believe in women’s tennis. The women would have to fend for themselves.

“We went to Jack Kramer, the boss of the Grand Prix circuit – who founded the ATP in 1972 – to ask to be better regarded and to be paid more,” explains Casals, the world No 3 in 1970. “He never even wanted to consider it. He didn’t believe in us.”

“There was more money for men’s tennis, more spectators in the stadiums, more television audiences,” notes Donald Dell, one of the founders of the ATP.

In jointly-organised tournaments, the gap between men’s and women’s prize money was increasing. At the prestigious Pacific Southwest Open in Los Angeles in 1970, just after the US Open, the men’s first prize was $12,500, while the prize-money for all women was only $7,500.

Casals, one of the women who worked hardest to develop and promote women’s tennis, recalls: “When executives were asked to be paid more, one of the things we were told was that women are not supposed to earn a living.”

The players then went on to fight a battle that went beyond the sport. “It was societal. We joined the women’s emancipation movement. We were fighting for equality.”

In the summer of 1970, just before the start of the Pacific Southwest Open, King and Casals went to see Gladys Heldman. The founder and publisher of World Tennis magazine, the most important tennis publication at the time, Heldman was hugely influential.

Casals, who won 12 Grand Slam doubles titles in her career and reached two singles finals at the US Open in 1970 and 1971, recalls:

“We told her that we were considering not playing the tournament, out of protest, because we thought it was fundamentally unfair to have prize money eight times lower than the men. But we didn’t just want to complain. We wanted to do something concrete.”

Heldman would use her contacts to hold a women-only tournament in Houston alongside the Pacific Southwest Open, convincing Joe Cullman, the boss of cigarette manufacturer Philip Morris, to sponsor women’s tennis. That’s how Virginia Slims, a brand produced by the tobacco company for women, would become the sponsor of the circuit.

“A great sponsor, who really cared about us, and believed in the emancipation of women,” notes Casals.

“I won that first tournament and I won $1,600,” recalls Casals, whose game was atypical because of her small size – she is 1.59m tall. “It was already more than just the first women’s first prize at the Pacific Southwest, it was symbolic.”

This was not a risk-free move. The USLTA, the American federation, sanctioned the slingers and their competing circuit by banning them from participating in Grand Prix tournaments and threatening their right to compete in the next US Open.

“The men, who ran all the governying bodies of tennis, said we were crazy and that it would just be a one-shot,” Casals recalls.

But the success of the Virginia Slims circuit would prove the Original 9 right. By 1971, the circuit already had 10 tournaments.

“Women’s tennis was a huge success,” says Durr. “People loved the tactical aspect of our game so much. I think that as amateurs, people recognised themselves more in women’s tennis than in brutal men’s tennis.

“Billie Jean was an incredible leader.”

Just before Wimbledon in 1973, when 70 women players locked themselves in a room at London’s Gloucester Hotel at the initiative of King and Casals, observers thought that the women were organising themselves to join the men’s boycott of the Championships. On the contrary, aware that the absence of the best male players would put them in the spotlight, the women wanted to play. In fact, the women were creating the WTA in response to the men, who had launched the ATP in September 1972.

“We also needed a structure to allow all players to benefit from the development of women’s tennis,” said Casals, the most influential player after King. At the beginning of the meeting Billie said, ‘Until we have an association of players, we’re not getting out of here'” .

“Billie asked Betty Stöve, who was the tallest, to stand in front of the door. In just two hours, we’d set up the WTA,” recalls Durr, who would take over as its secretary. “The aura and leadership of Billie Jean King helped us enormously. She was an incredible leader on and off the court.”

King, now 76 and a global sporting icon, had already won nine of her 12 Grand Slam singles heading into Wimbledon in 1973 and while she was coming to the end of her most successful period, she was a hugely important figure in the sport. That year, the American was chosen by her peers to be the first president of the WTA and in the same year, she would give women’s tennis a massive boost through a particular event, the Battle of the Sexes.

Earlier that year, Bobby Riggs, a three-time Grand Slam champion including at Wimbledon in 1939 but now 55 years old and retired since 1962, defeated Margaret Court 6-2 6-1 in an exhibition match. The American took the opportunity to publicly denounce women’s tennis.

“I knew then that I had to face him. We women were making real progress. I wanted to keep it going,” King told ABC in 2013.

Riggs accepted the challenge and assured the media that he will win. But King won without a hitch 6-4, 6-3, 6-3. The operation was a success. The game was watched by 50 million people in the United States.

Little by little, the men were forced to accept that women’s tennis was a success. Their tournaments were multiplying and attracting more and more people. As early as 1973, the US Open granted the same prize money to men and women. However, it was not until 2001 that another Grand Slam event, the Australian Open, made the same decision.

“Looking back, creating their own association and not associating with the men was the best thing for women,” says Steve Flink, an American journalist and tennis historian. “They were able to promote the uniqueness of women’s tennis.”

“Venus Williams has done a tremendous amount of work.”

The personality, aura and pugnacity of great players, and some notable rivalries, would then allow the WTA Tour to grow.

“The rivalry between (Chris) Evert and (Martina) Navratilova, which lasted 14 years and featured 80 matches between 1975 and 1988, was an incredible opportunity for women’s tennis,” enthuses Richard Evans, a British journalist who has covered 170 Grand Slams.

“Women’s tennis has realised its tremendous potential,” said Donald Dell. “The matches are short. The game is very tactical. The players are attractive. They have great personalities.”

“Having Serena Williams here today is also a great privilege. I hope she will continue to promote women’s tennis after her career,” adds Casals.

Her sister Venus is one of the players who has done the most for women’s tennis.

“She has done a considerable amount of work behind the scenes to get equal prize money at all of the Grand Slams, just when the men’s Big 4 went to them (the Slams) for more money,” recalls Richard Evans.

“But the new generation of players has to take over, claims Rosie Casals, has do more to promote women’s tennis, not just build on what they’ve done in the past”.

So should we foresee a merger with the men, as Simona Halep suggested in response to Roger Federer’s proposal? Rosie Casals wants guarantees:

“It remains to be seen. Women don’t have to be that crazy. We have to see whether our voice would be well considered and listened to in a merged body. Federer and Nadal will not be there anymore in 5 years, we don’t know what the others think.”

One man has already tried to bring them together in the past, without success. That man is Larry Scott, the WTA boss from 2003 to 2009. In 2003, shortly after he had taken the WTA job, the American also ran for the job as president of the ATP, as the men’s governing body was looking for a new boss.

“During his interview, he explained that he wanted to merge the two institutions. The men didn’t want it at all”, Dell recalls.

In 2020, the power balance between men and women tennis is a lot more equal than in 2003. But women tennis has not finished its growth.