Home » News » Roland-Garros » May 23, 1994: The day Martina Navratilova broke her racquet as she bid farewell to Roland-Garros

Every day, Tennis Majors takes you back in time to relive a tennis event which happened on this specific day. On May 22, 1994, Martina Navratilova bid farewell to Roland-Garros for the first time, only to return years later 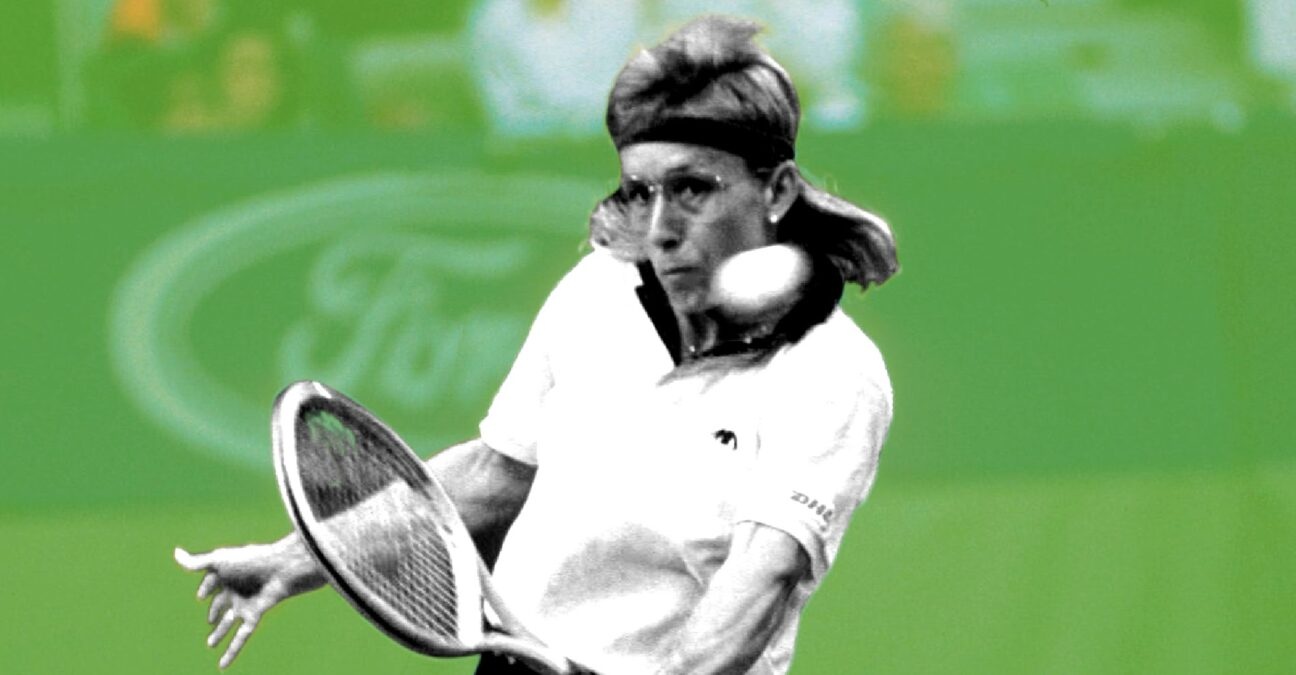 Martina Navratilova, On this day

On this day, May 23, 1994, Martina Navratilova, aged 37 and still ranked No 4 in the world, lost to Miriam Oremans, ranked No 54, 6-4, 6-4, in the first round at Roland-Garros. As 1994 was her farewell season, she decided to come play in Paris for the first time since 1988. A true legend of the sport, twice champion and four times runner-up at Roland-Garros in the 1980s, it was exciting for the French crowd to have her back and was a big shock to see her lose so early in the tournament, especially considering she hadn’t lost in the first round of a Grand Slam tournament since 1976.

• Martina Navratilova: The greatest of all time?

According to Billie Jean King, Martina Navratilova, born in 1956, was, “the greatest singles, doubles, and mixed doubles player who ever lived”. Since 1968, when the Open Era began, no male or female player won more singles tournaments (167), doubles events (177), or matches (2,189) than Navratilova.

Navratilova had claimed a total of 18 Grand Slam singles titles, including a record nine Wimbledon crowns, six of them successively between 1982 and 1987. By 1994, she had already accumulated 31 Grand Slam doubles titles, as well as seven in mixed doubles. Only the mixed doubles Australian Open title was missing from a Boxed Set of Grand Slams – winning all the four events in singles, doubles and mixed doubles.

The greatest singles, doubles, and mixed doubles player who ever lived.

She also held a record of six consecutive Grand Slam titles between Wimbledon in 1983 and the US Open in 1984 (back then, the Australian Open was played in December), and she had held the world No 1 spot for 332 weeks, a record at the time.

Navratilova, left-handed, played serve-and-volley like no one else before her. According to her greatest rival, Chris Evert, the Czech-born American took fitness to a new level in women’s tennis, introducing the idea of cross-training and playing other sports such as basketball in order to improve her physical condition.

Navratilova’s career was strongly impacted by her rivalry with Evert, whom she faced a record 80 times through her career, holding a 43-37 lead, although Evert had won 21 of their first 25 encounters. Their matches were even more dramatic due to their opposing styles of play – Martina attacked the net at every opportunity while Chris was known for her more consistent baseline game. In fact, at Roland-Garros, they had faced each other in four finals and Evert, the ultimate baseline player, defeated Navratilova three times (in 1975, 1985 and 1986) while Martina prevailed only once, in 1984. 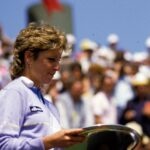 Later in her career, Navratilova had to face her toughest opponent in Grand Slam finals, Steffi Graf. The German, 10 years younger than Navratilova, prevailed in four of their six Major finals and took over the world No 1 ranking from the American on August 17, 1987.

Miriam Oremans, from the Netherlands, was born in 1972. She obtained her best ranking of world No 25 in 1993 after reaching her first final on the tour in Eastbourne (where she was beaten by Navratilova, 2-6, 6-2, 6-3) and the fourth round at Wimbledon (losing to Jana Novotna, 7-5, 4-6, 6-4). In 1994, she dropped in the rankings after suffering an injury before the Australian Open and, arriving at Roland-Garros, she had not won a main-draw match since early March.

The place : “Court A”, today known as Court Suzanne-Lenglen

The story unfolded at Roland-Garros, Paris. The stadium, located in the west of Paris at the edge of the Bois de Boulogne forest, had been hosting the French Grand Slam since 1928. It was the first and now only Grand Slam to be played on clay, the slowest surface, which made it the hardest tournament to win from a physical perspective. With the prominence of baseliners like Bjorn Borg or Evert, and the topspin era, winning Roland-Garros became the biggest challenge for players who liked to play aggressive and attack the net.

In the 1980s, only two players managed to win in Paris while consistently playing serve-and-volley, Navratilova in 1982 and 1984, and Yannick Noah in 1983. This explains why Navratilova had skipped such an important tournament for five years in a row. In 1994, for the first day of the tournament, the novelty was the debut of a new 10,000-seat showcase stadium, Court A, which would eventually be renamed after French legend, Suzanne Lenglen, in 1997.

The facts : Navratilova smashes her racquet and ends up losing

Although she had skipped the tournament in the last five years, and even though her serve-and-volley game was not believed to be as efficient as before on clay, 37-year-old Navratilova was still ranked world No 4 at the time. She had just reached the final in Rome over a week ago (defeated by Conchita Martinez, 7-6, 6-4). Facing the legend, winner of 167 titles including 18 Grand Slams singles titles, stood Oremans, who was still searching for her first singles title on the tour, and whose best performance at a major event was reaching the fourth round at Wimbledon, in 1993.

I think that is why I was more affected by losing, because I know this is the last time.

Thus, on May 23, 1994, Navratilova entered Court A to play her first round as the favourite. Oremans had no intentions of giving her the match and took her chances. As Navratilova struggled to find depth, the Dutchwoman started to run her around. This was a dangerous turn of events for Navratilova, considering their age difference: Oremans was only one-year-old and taking her first steps when the legend was starting out on the tour in 1973.

Navratilova was not her true self on the day and she soon lost the first set 6-4. In the second set, she had a glimmer of hope as she held two break points at 3-2 but Oremans courageously held serve. It wasn’t long before Navratilova, down 5-4, faced a match point. The Dutchwoman attacked the net and Navratilova’s backhand passing shot was long. Navratilova was defeated in the first round of a Grand Slam event for the first time since the 1976 US Open.

The defeat hurt Navratilova enough for the left-handed legend to smash her racquet and throw it in the bin before leaving the court, vaguely waving to the crowd and skipping the on-court interview.

Later, according to the Los Angeles Times she said, “I have never done that before [smashing her racquet]. And I hope I never will again. But at that point I was too disappointed to care about anything. I get misty eyed. I think that is why I was more affected by losing, because I know this is the last time. I will finally get to go the Louvre.”

What next? : Navratilova returns to win more Grand Slams well into her 40s

Oremans would go as far as the third round in Paris that year, where she would eventually lose to Petra Schwartz (4-6, 6-2, 6-1). Her career highlight would be winning the silver medal in doubles at the 2000 Sydney Olympics partnering Kristie Boogert. She won three WTA doubles titles, a five-time singles finalist on the main tour, and also reached the final of the mixed doubles event at Wimbledon in 1992 with Jacco Eltingh.

Navratilova would fare much better in her farewell appearance at Wimbledon, reaching the final, where she would be defeated by Martinez 6-4, 4-6, 6-3. This time she would receive a long standing ovation from the public that she so fully deserved.

In 2000, Navratilova would come back to the tour, playing mostly doubles, and by winning the mixed doubles at the 2003 Australian Open, partnering Leander Paes, she would indeed complete that Boxed Grand Slam and become the oldest Grand Slam champion of all time, at the age of 46.

In 2004, she played at Roland-Garros one final time, losing to Gisela Dulko, of Argentina, in the first round. She received a controversial wild card into Wimbledon, where at the age of 47, she would incredibly win her first-round 6-0, 6-1 against world No 102 Catalina Castano, before losing again to Dulko, this time in three sets, 3-6, 6-3, 6-3. In 2006, a few weeks shy of her 50th birthday, she would win the mixed doubles title at the US Open, partnering Bob Bryan, to finish her career with yet another Slam title. 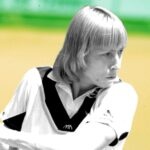 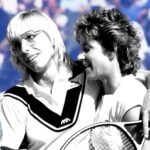 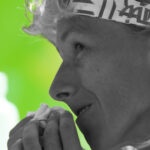 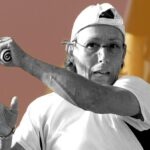 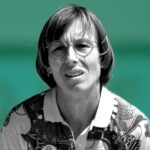