The first set of the 2020 Roland-Garros final between Rafael Nadal and Novak Djokovic ended with an unexpected and unprecedented score between the two men in the Grand Slam: 6-0. Although it lasted three quarters of an hour, it was a symbol of the most lopsided Nadal-Djokovic set in history.

It took 54 minutes for the chair umpire to call “jeu, Djokovic” under the closed roof of Court Philippe-Chatrier. This Roland-Garros 2020 final was on paper hailed as “the greatest match in history” before the two rivals faced off. It was supposed to be the ultimate gladiatorial fight. Instead, 6-0 in the first set. For one or the other, this score between Nadal and Djokovic was something unimaginable between two men who are on top of the sport. Nadal had already triumphed 12 times at Roland-Garros, but Djokovic is the world No 1 and was undefeated in 2020 excluding disqualification. The Serb is also the only man to ever defeat the Spaniard in straight sets on the terre battue of Paris (2015 quarter-finals).

On the court this time, only one was at his best (Nadal). The other quickly got annoyed at so much helplessness and bad luck (Djokovic). One was effective on his break points (three of six in this first set). The other non-existent (zero out of three). And despite some exceptional rallies between two great players, it was not enough to change the eventual outcome of a “bagel” — the supreme humiliation for any tennis player. With that Djokovic had been brought down to the level of poor Mackenzie McDonald and Stefano Travaglia, whom Nadal blanked in sets during week one of the tournament. But those were not as surprising. This was unheard of.

6-0 was not completely new in this head-to-head history. Nadal had rebuilt his confidence during the 2019 season by winning the Rome tournament and beating the Serb 6-0, 4-6, 6-1 in the final. It was their penultimate match to date and the last on clay. Maybe we had forgotten. In 2020, no one other than Nadal has stuck 6-0 twice for the Serbian in his fifteen-year career. 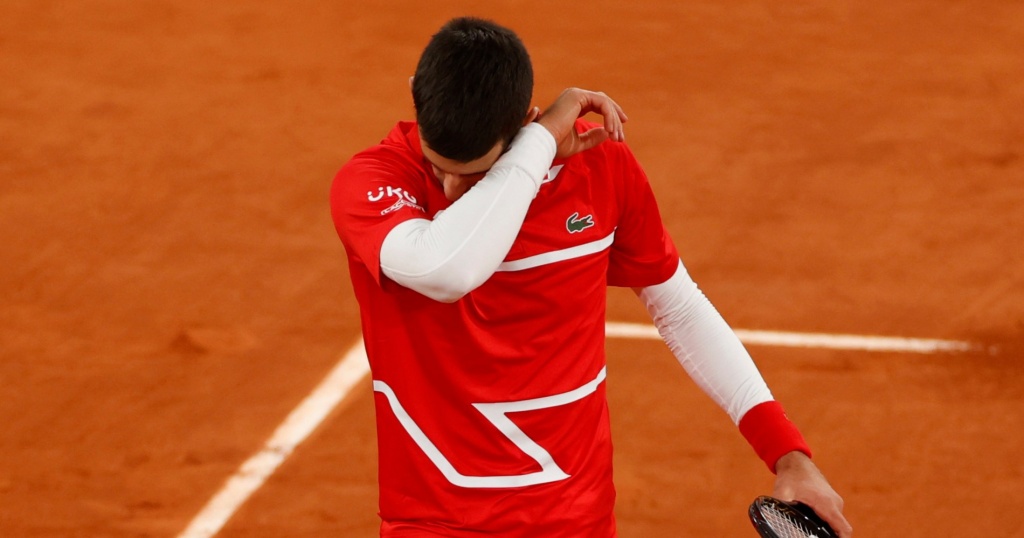 What is striking is, of course, is that this came in the setting of a Grand Slam final – and with Djokovic in his prime. When Safin had delivered a bagel to Djokovic in 2005 in Melbourne (6-0, 6-2, 6-1), Djokovic was a teenager and the Russian went on to win the tournament. When Thiem did it at Roland-Garros in 2017 (7-6, 6-3, 6-0), Djokovic had been slumping for about six months; and it wasn’t in the final.

Memories of 6-0 sets in finals

A 6-0 opening should also tell the story of a match’s overall outcome. When you win the first set 6-0 in a Grand Slam final, victory becomes almost inevitable. Only Guillermo Coria in the Open Era did not capitalize on such a lead. Coria bageled Gaston Gaudio to begin the 2004 French Open final but eventually squandered two championship points and lost in five. But the diminutive Argentine has few similarities to Nadal, the master of Roland-Garros who is so strong, so sure, so confident.

Even in his most dominant finals, Nadal had hardly ever produced a 6-0 set. He came close with a 6-1 effort in 2017 against Stan Wawrinka and a 6-2 scoreline in 2013 against David Ferrer… Only in 2008, his fourth consecutive title in Paris, did Nadal erase Roger Federer 6-1, 6-3, 6-0. At the time, the Swiss had been world No 1 for four straight years. This performance in 2020 brought back memories of that one 12 years ago.

A glance in the archives reveals that bagels are not so rare in the Roland-Garros final. In addition to the aforementioned examples, we find traces of it in 2002 (Albert Costa against Juan Carlos Ferrero, 6-1 6-0 in the first two sets), in 2001 (Gustavo Kuerten beat Alex Corretja in four sets), in 1982 (Mats Wilander beat Guillermo Vilas in four sets), in 1973 (Ilie Nastase against Niki Pilic), and in 1970 (Kodes against Franulovic). The only consolation that Djokovic can find in such an ordeal is that he avoided a double-bagel similar to that received by Brian Gottfried in 1977 against Vilas (6-0, 6-3 , 6-0).

Of course, such a disaster always supports a little humor. Australian Sam Groth, now retired, recalled that he suffered less against Nadal in 2016. “It’s not that hard to score a game at Nadal in Paris,” he tweeted, referencing the triple-breadstick (6-1, 6-1, 6-1) he was a part of in the 2016 first round. And Nadal was not even indestructible that year; he would eventually be struck down prior to the third round by a wrist injury.

It’s not that hard to win games against Nadal in Paris, I mean I won 3 of them!! @rolandgarros pic.twitter.com/0ijlzbH7cG