Since Miami, Daniil Medvedev has been wearing the Lacoste AG LT-21 Ultra, a pair of tennis shoes that marks the return of the French brand to the performance range. Tennis Majors and Sébastien Proisy mark the event with the creation of the new video show, Footwork Masters 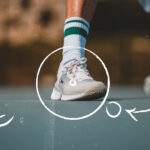 Footwork Masters #2, with Daniil Medvedev: Mastering the art of moving forward
The figures

Daniil Medvedev won his first match at the Miami Masters 1000 against Yen-Hsun Lu (6-2, 6-2), and now the number one seed is in the third round of the tournament. But Medvedev’s victory was not the only big tennis event in this match.

The other event was on Medvedev’s feet. The Russian player wore a pair of Lacoste AG LT-21 Ultra shoes and the association between this tennis shoe model – available since March 27, 2021 – and the second best player in the world marks the return of the French brand Lacoste to the performance range of tennis shoes.

Medvedev has been playing in Lacoste shoes since the 2019 season, when he soared to the highest level, rising from 19th to 4th place in the world, thanks in particular to reaching the final at the US Open and his first successes in the Masters 1000. That rise continued in 2020 with his victories at the London Masters and the Rolex Paris Masters, and then in 2021 with his final at the Australian Open and his recent victory at the Marseille tournament.

The association between Medvedev and Lacoste around a performance shoe was an obvious and natural one. Medvedev is one of the most mobile players on the ATP Tour, often praised for his exceptional running ability, rare for a player of his size.

In this performance-oriented series, which is aimed at all players looking to improve their game, Sébastien Proisy gives you the keys to effective footwork.

In this first episode, Proisy analyses the keys to a lateral forehand move on the baseline, when the opponent plays crosscourt with the objective of outrunning you.

And Proisy concentrates on these phases:

The next issue of Footwork Masters will be out in April. Sébastien Proisy will give you all the tips you need to avoid being surprised by the opponent’s dropshot.