Testing Equipment is a video format by Seb Proisy for Tennis Majors. It will tell you what the pros use to be at their best, and what you should use to have fun and win the more matches. Racquets, shoes, strings, and everything a tennis player needs will be tested. Episode #4 is dedicated to the stiffness, size and length of a racquet. 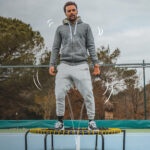 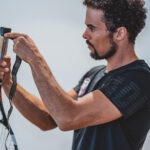 The grip – Testing Equipment #5
The figures

Does your racquet have the right stiffness for your game? For an amateur player, such a concept may be tricky. But it is essential. Seb Proisy explains it to you how adapting the stiffness, head size or length of your racquet can help you playing better.

Racquet stiffness refers to how much your racquet will bend during an impact. The stiffer the racquet, the less it will bend. It is similar to the trampoline effect we discussed in our previous episode.

The stiffer the racquet, the more power

However, unlike the strings, a racquet bending on impact does not return to its original shape until after the ball has left the racquet.

So to be clear, a stiffer racquet will bend less and deflect more power to the ball, while also adding more shock to your arm.

In contrast, a more flexible racquet will absorb more energy and therefore result in a loss of power. But on the good side, it would send less shock to your arm.

Racquet head size plays an important role when it comes to power. A larger racquet head will allow the ball to sink deeper into the strings and results in more power than a racquet with smaller head size.

In 2014, Roger Federer decided to switch to a bigger head size to help his backhand deal more damage against players like Nadal who would relentlessly attack his backhand. It affected his forehand negatively because he was less consistent. But he was able to adjust to the added power and was able to find ways to finally beat Rafa.

Racquet length is another factor to consider when choosing a racquet. While most brands offer racquets that are 68.5cm, some brands like Babolat offer longer versions of their racquets by adding 1.5cm.

Some players in the past like Michael Chang, David Ferrer, and Marion Bartoli, used even longer racquets. But nowadays it is very rare to find players who use racquets that are longer than 70cm.

The biggest downside of using a longer racquet is that it is more difficult to manoeuvre. It is especially problematic when hitting volleys: the swing needs to be more compact, the ball is hit much closer to the body. This is why players who serve and volley don’t usually use longer racquets.