As she celebrates her first Grand Slam at the US Open, here are the answers to 10 questions you may have about the 18-year-old Brit who has created tennis history in New York 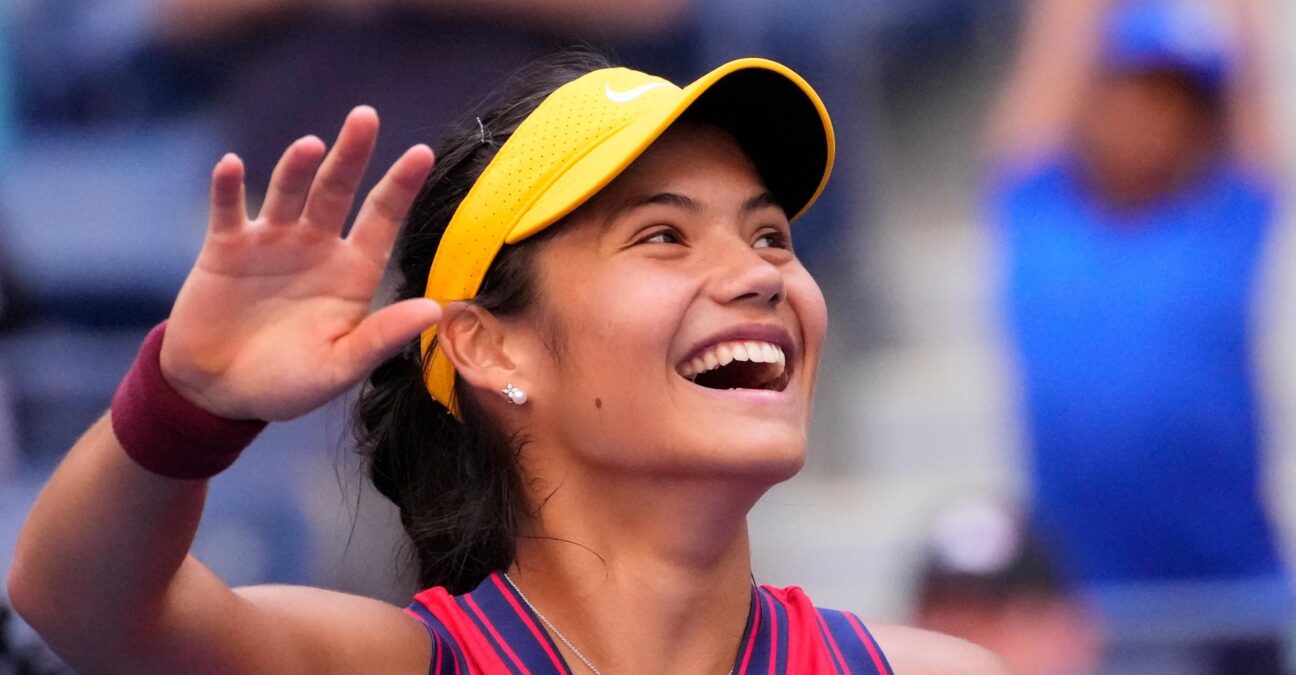 WHO IS EMMA RADUCANU?

Emma Raducanu is a professional tennis player from Great Britain. She was born on November 13, 2002, in Toronto, Canada to a Romanian father and a Chinese mother; the family moved to the UK when Emma was a baby.

WHY IS EMMA RADUCANU IN THE NEWS?

Emma Raducanu has created history at the 2021 US Open as she became the first qualifier, male or female, in the history of the sport to win a Grand Slam final. The Brit won three matches in qualifying and then seven in the main draw, including wins over American Shelby Rogers, Olympic gold medalist Belinda Bencic, the No 11 seed, and 17th seed Maria Sakkari, to win the championship match against Leylah Fernandez without dropping a set during her historic run.

HOW DID EMMA RADUCANU DO AT WIMBLEDON IN 2021?

Emma Raducanu became one of the biggest storylines at Wimbledon 2021 after reaching the fourth round as a wildcard entrant. The 18-year-old had never played in the main draw of a Grand Slam prior to this year’s Wimbledon. She scored wins over Vitalia Diatchenko, Marketa Vondrousova and Sorana Cîrstea to become the youngest Brit to reach the fourth round at Wimbledon in the Open era, and met Ajla Tomljanovic for a spot in the quarter-finals before having to retire mid-match.

HOW TALL IS EMMA RADUCANU?

HAS EMMA RADACANU COMPLETED HER A-LEVELS?

The Brit sat her final A level assessments in April this year, albeit in the new Covid-restricted conditions. She studied maths and economics at Newstead Wood, and said that her studies have helped her tennis as well. She received an A* (the highest mark possible) in maths and an A in economics.

“That school has been so supportive. They let me travel whenever I needed to or train. I’ve been with them for seven years now. To leave them it’s a bit sad. Next chapter.” Raducanu stated after her first-round win. “I think staying in school has definitely helped me in terms of having another set of friends I can come into. It was a different way of life. It’s a bit of an escape as well for me. To have another thing going alongside my tennis, it’s kept my mind occupied.”

After winning the US Open, Raducanu made a stop by the New York Stock Exchange where she spoke about how she is fascinated by Wall Street as she has studied finance during her course.

“It’s the one place on my bucket list I had to check out before leaving New York. I’m just so grateful to everyone who made this possible. “It’s something that I’ve been studying at school in my A-levels. To see it live is just incredible.”

WAS RADUCANU A GOOD JUNIOR?

Raducanu peaked at No 20 in the ITF Junior Rankings. The Brit has claimed seven ITF junior titles, including Grade 2 events such as Siauliai Open, Biotehnos Cup, Delhi ITF Juniors, and Chandigarh ITF Juniors. Her best performance at the junior Grand Slams was reaching the quarter-finals at Wimbledon and the US Open in 2018.

WHAT IS RADUCANU’S HIGHEST RANKING?

The Brit entered the US Open as the world No 150, her best ranking to date. She is predicted to be at least No 32 and could go as high as No 24 if she wins the title. In either case, she will become the new British No 1, thanks to her efforts at the US Open. Her ranking history is available on her WTA tour profile page.

HOW MANY TITLES HAS RADUCANU WON IN HER CAREER?

The Brit has claimed three ITF World Tour singles titles in her career so far – the most recent of which came at the ITF $25K in Pune, India.

Radacanu is coached by former British player Andrew Richardson, who also coached her when she was younger. Previously, she was coached by British tennis coach Nigel Sears, the father-in-law of Andy Murray, and a former coach of Daniela Hantuchová and Ana Ivanovic.

“Andrew is a very good coach,” she said at the US Open. “He’s very good at instilling the fundamentals into my game and just making me realise (that) doing the basics to a really good level is going to take you a long way. He’s also a very calming character. To be able to have someone like him in my corner, it definitely gives me a lot of confidence in these situations to know that he believes in me. I’m really grateful that he’s taken a chance on me.”

HOW MUCH PRIZE MONEY HAS RADUCANU WON IN HER CAREER?

WHO ARE HER IDOLS?

Raducanu cites China’s Li Na and Romania’s Simona Halep as her idols – but adds that it has more to do than just their common ancestry.

“I think it’s really such a coincidence that those are two of my favourite players that I try to model my game after. I happen to have a connection to both those countries. I think it’s definitely helped me, the mentality that both of them bring. They both come from very hard-working countries. On my mum, she’s always instilled a lot of, like, discipline, respect for other people into me. I think having parents like I do, they always push me. They have high expectations. I’ve always tried to live up to that. And I hope I did them proud this week. I’m going to keep trying to go, keep going.”

WHAT IS RADUCUNU’S STYLE OF PLAY?

Raducanu is known for her flat powerful groundstrokes, and uses a two-fisted backhand. She is known to play aggressively and admits herself she is not the best retriever on the tour.

“If you ask any of my team, I think they would say, She doesn’t run for balls,” the Brit said after her third-round win at Wimbledon. “If ever there was a time to start running, that was today. I’m happy that it paid off (smiling). I couldn’t believe some of them myself. I think playing on Court 1, you’re definitely inspired. You do things maybe you don’t normally do. Yeah, I was having fun just chasing those balls. It’s probably the first time I enjoyed chasing the balls. Maybe that’s something that I can take on and continue.”

IS RADUCANU ON SOCIAL MEDIA?