Every day, Tennis Majors takes you back in time to relive a tennis event which happened on this specific day. On this day in 1990, Stefan Edberg beat Brad Gilbert to capture the Cincinnati title and become world No 1 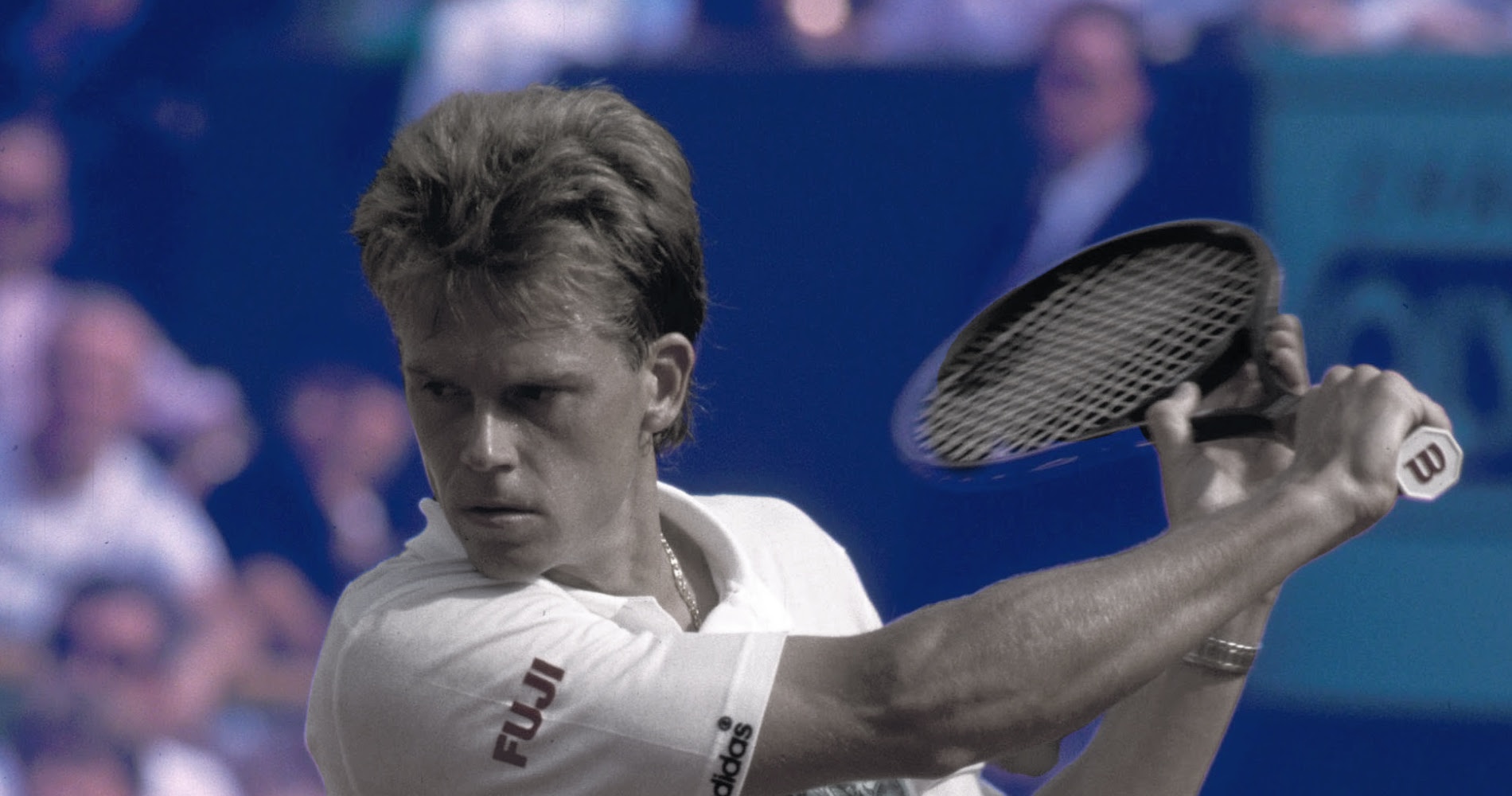 On this day, August 12 1990, Stefan Edberg outclassed defending champion Brad Gilbert in the Cincinnati final. The 6-1, 6-1 victory in under an hour made the Swede the world’s top-ranked player for the first time. Edberg, who had just claimed his second Wimbledon title earlier in the summer, had been chasing the top spot since he became world No 2 for the first time in 1987 – but Lendl had managed to keep the top spot out of reach. After finally ascending to the top, the Swede would remain No 1 for 24 consecutive weeks – and ultimately 72 weeks in total.

Stefan Edberg was born in 1966. After an incredibly successful junior career (he won all the four majors to win the junior ‘Grand Slam’ in 1983), he almost quit tennis the same year at the age of 17 after one of his serves accidentally killed a line judge in New York. He continued, however, and surely didn’t regret the decision. As early as December 1985, a few months after young Boris Becker had broken through by winning Wimbledon, Edberg claimed his first Grand Slam on the grass courts of the Australian Open – defeating countryman Wilander in the final (6-4, 6-3, 6-3). The tournament was not held in 1986 due to its indefinite change of date to January, and Edberg would successfully defend his title in January 1987 – defeating Aussie favorite Pat Cash 6-3, 6-4, 3-6, 5-7, 6-3.

In 1988, he added a Wimbledon title to his achievements by beating Becker (4-6, 7-6, 6-4, 6-2) in a final that started one of the most famous rivalries in tennis history. In 1989, Edberg lost confidence after losing two major finals in a row. The first one came at Roland-Garros, where he was stopped by Michael Chang (6-1, 3-6, 4-6, 6-4, 6-2) in  a heartbreaking match during which he missed 10 break points in the fourth set. The second one came at Wimbledon, where Becker took brutal revenge for the previous year’s final loss by triumphing over Edberg 6-0, 7-6, 6-4. The Swede lost in the final of five other important events that year, but in the end, he managed to edge Becker in the final of the Masters Cup (4-6, 7-6, 6-3, 6-1). He started 1990 by reaching the final at the Australian Open, but was forced to retire in the second set of his clash against Lendl because of an abdominal injury. After another disappointment at the French Open, where he lost in the first round, Edberg reclaimed the Wimbledon crown by getting the better of Becker in five sets in their third consecutive final at the All-England Club (6-2, 6-2, 3-6, 3-6, 6-4). Finding himself closer than ever to becoming world No. 1, Edberg set out on a busy American tour in order to seize the opportunity.

Brad Gilbert was born in 1961. The American turned pro in 1982, and within a few months, he claimed the  first of his 19 titles in Taipei. Unlike many other professional players of his era, Gilbert did not have a major offensive weapon in his arsenal and his game relied mostly on his great tactics. Although he managed to climb as high as No 4 in the rankings in early 1990 after he had won five tournaments in 1989, his best Grand Slam results were two quarter-final appearances – at the 1987 US Open (lost to Jimmy Connors 4-6, 6-3, 6-4, 6-0) and at Wimbledon in 1990 (lost to Becker 6-4, 6-4, 6-1). Gilbert had also won the bronze medal at the Seoul Olympic Games in 1988 after he lost in the semi-final against fellow American Tim Mayotte (6-4, 6-4, 6-3). In August 1990, Gilbert was ranked No 7 in the ATP rankings.

The place: The Lindner Family Tennis Center in Cincinnati

The Lindner Family Tennis Center in Cincinnati, Ohio had been holding a prestigious men’s event continuously since 1899. In 1981, the tournament became a part of the prestigious Grand Prix and many great players played this event to prepare for the US Open. In those years, the Cincinnati Open was won by champions such as John McEnroe (1981), Lendl (1982), and Mats Wilander (1983, 1984, 1986, 1988). In 1990, with the establishment of the ATP Tour as the only professional circuit, Cincinnati entered the Super 9 category (now known as Masters 1000 Series), becoming the third-most important tournament in the United States after the US Open and Key Biscayne.

The facts: Edberg waits to pop the champagne

In August 1990, when Edberg arrived in Cincinnati, he was on a mission to become world No 1 for the first time. Following his second triumph at Wimbledon, the Swede was closer than ever to Lendl – who had skipped the French Open to focus on Wimbledon (where Edberg defeated him in the semi-final 6-1, 7-6, 6-3). In the first tournament of his American summer tour in Los Angeles, Edberg took one more step toward the top by winning the title. He bested Michael Chang 7-6, 2-6, 7-6 in the final despite a sprained ankle. In Cincinnati, the Swede faced Chang again in the quarter-finals. When he edged the American 3-6, 6-3, 6-4, Edberg was mathematically assured to become the new world No 1 at the end of the week – but he stayed focused on his goals and delayed any form of celebration

”I wanted to wait until I had won the tournament to celebrate; I want to do the things that will keep me No 1. I’ve been waiting to get there for a long time.” – he told The New York Times.  In the semi-final, he beat Roland-Garros champion Andres Gomez 7-5, 6-3 to set up the final clash against Gilbert. It was a rematch of the 1989 final, in which Gilbert had claimed the title at Edberg’s expense via a 6-4, 2-6, 7-6 win.

This time the outcome was different, and the final was the most one-sided in the tournament’s history. In a demonstration of classic serve-and-volley tennis, Edberg showed why he was about to become world No. 1 – winning 52 out of 79 points. He didn’t face a single break point and made only eight unforced errors in the entire match. It took him only 50 minutes to dismiss Gilbert and reach the top of the rankings in style.

According to The Washington Post, an exasperated Gilbert admitted, “The guy thoroughly beat on me. That’s the bottom line. He just beat on me.”

Meanwhile, as reported in the same paper, Edberg – who was now on 17-match winning streak dating back to Wimbledon – was proud of his achievement, saying, “This is one to remember, with all the things that have happened this week I became No 1 after the quarter-finals, and then I proved it. I proved it by the way I’ve played over the last month-and-a-half.”

As he would say later to the New York Times, now was the time to celebrate. “Then we went out and popped a bottle of champagne – Dom Perignon – not too bad.”

Edberg would continue his winning streak in Long Island, claiming a fourth consecutive title by edging Goran Ivanisevic 7-6, 6-3 in the championship round. The Swede would not be able to extend his run at the US Open, where he would be defeated in the opening round for the first time of his career (lost to Alexander Volkov 6-3, 7-6, 6-2 in one of the biggest upsets in the tournament’s history). Edberg would later triumph at the Paris-Bercy Open, but although he would finish the season as world No 1, he would be defeated by Andre Agassi 5-7, 7-6, 7-5, 6-2 in the final of the last major tournament of the year – the Masters Cup. Edberg would claim two more Grand Slam titles in his career, both of those coming at the US Open (1991 and 1992). In total, he would spend 72 weeks as world No 1.

Gilbert would slowly decline in the early 1990s and would go on to become famous as a tennis coach, leading Andre Agassi to become world No 1. He also wrote a book, Winning Ugly, in which he explained his views on the game. His coaching career now over, Gilbert continues to work as a TV commentator.