Home » News » ATP » Federer vs Djokovic: GOAT, head-to-head, stats, all you need to know about the rivalry

Federer vs Djokovic: GOAT, head-to-head, stats, all you need to know about the rivalry

The rivalry between Roger Federer and Novak Djokovic is the most prolific in Grand Slams history. Here is everything you need to know about it. 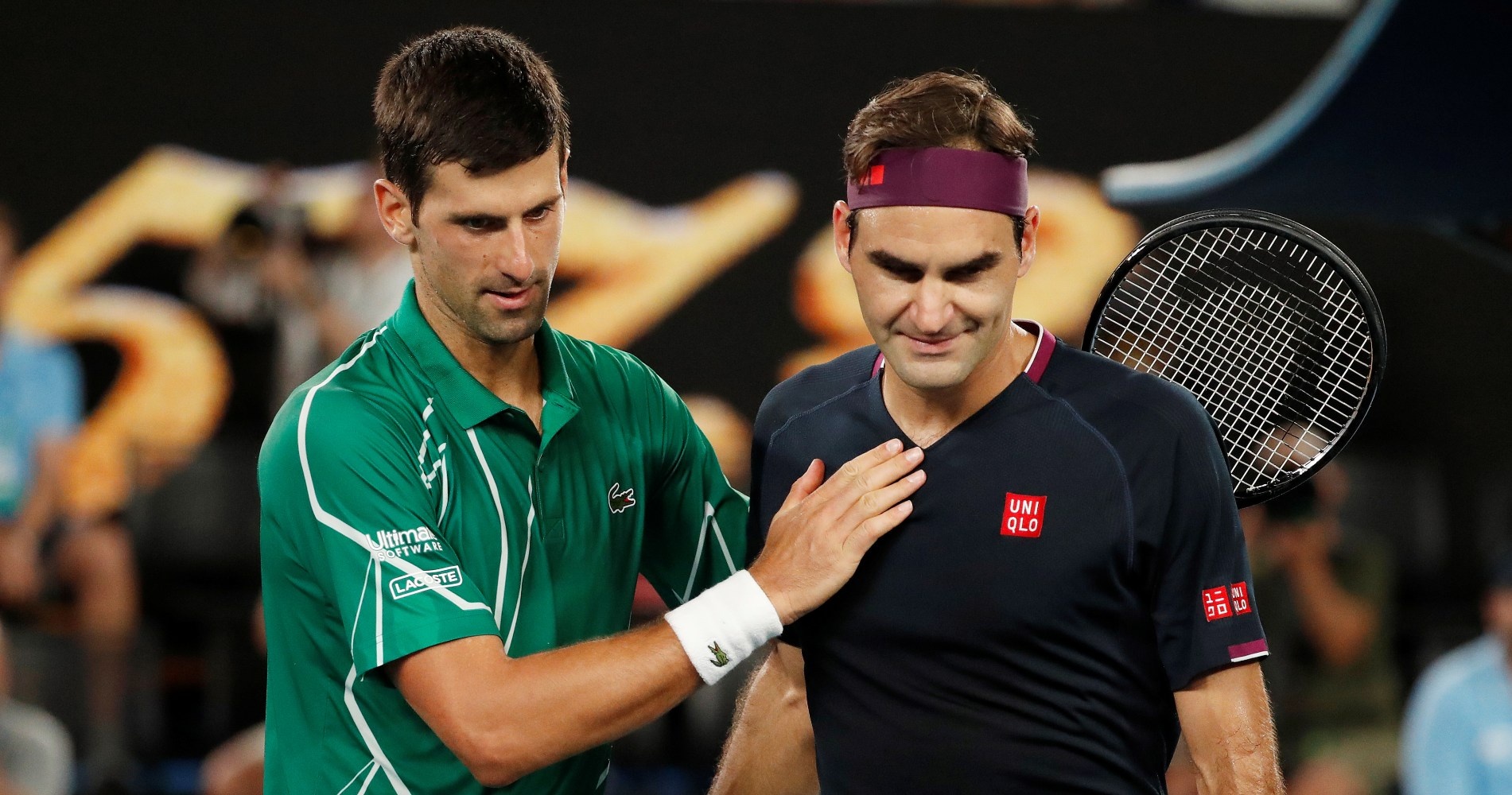 The two legends meet again in a Grand Slam after their scintillating Wimbledon final in 2019. After falling behind 5-1 in the first set, Djokovic turned it on against the world No 3 Roger Federer by erasing the deficit and then clinching the straight-set win.

The rivalry between Roger Federer and Novak Djokovic first developed into one part of a four-man show, and then converted into one of the most legendary of men’s tennis.

The two champions have met 50 times. This makes their rivalry the second most frequent match-up on the ATP Tour in the entire Open Era, behind the Serb’s rivalry with Nadal. But the Federer vs Djokovic rivalry is the most prolific in Grand Slam history. They have faced 17 times in Slams since 2007.

Federer led in his head-to-head with Djokovic until the end of 2015. He won their first four encouters. Djokovic’s first victory over Federer dates back to the 2007 Masters 1000 final in Canada. He defeated Federer in three sets: 7-6, 2-6, 7-6.

For long, far behind his rivalry with Nadal, Federer’s rivalry with Djokovic gained momentum after 2014. Before 2014, they had only faced once in a Slams final. From 2014 to 2019, they played four Slams finals together, while the Swiss played only one final against Nadal and the Serb one.

Federer vs Djokovic: Who is better?

Ranking these two champions is a conundrum, especially as they are not retired yet. Even though Djokovic has been dominating an elder Federer in the past six years, the Swiss has the game to worry the Serb or even beat him, as our expert Patrick Mouratoglou pointed out in The Eye of the Coach.

Nevertheless, here are some factual elements to help drawing a comparison.

As of May 2020, Federer has won the most Grand Slam tournaments of any male, 20, compared to Novak Djokovic’s 17.

Roger Federer has won 103 ATP titles in his career, which can be broken down as follows:

He won the Davis Cup with Switzerland in 2014.

Novak Djokovic, who turned pro five years after Federer, has won 79 ATP titles in his career, which can be broken down as follows:

He lifted the Davis Cup in 2010 with Serbia.

The Serb won the bronze medal in singles at the Beijing Olympics in 2008. 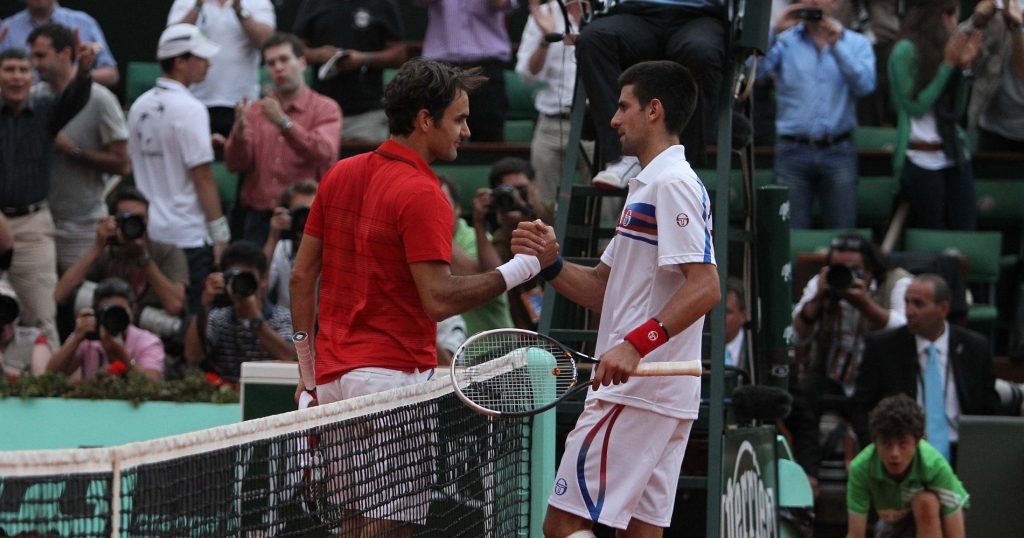 Novak Djokovic is the only player ever to have won every Masters 1000 in his career (Miami, Indian Wells, Monte-Carlo, Madrid, Rome, Montreal / Toronto, Cincinnati, Shanghai and Paris). Federer did not win in Monte-Carlo and Rome, though he played several finals there.

Roger Federer has spent 310 weeks at world ATP No. 1, the longest in the Open Era, including an all-time best 237 consecutive weeks from February 2004 to July 2008.

But Novak Djokovic is chasing this record. He is currently No. 1 and has been so for 282 weeks in his career (as of June 2020).

Djokovic admits he is aiming to overtake chase Federer’s records: “I will try to be the best in the world”.

Who has the best statistics?

As of April 2020, Federer has won 1242 matches in his career, compared to Djokovic’s 911. But Djokovic is six years younger.

Federer and Djokovic have a 54% career point winning ratio. Federer is a better server (He won 70% points on his serve versus 67% for Djokovic). But Djokovic is a better returner, he probably has the best return games in modern tennis (Djokovic won an impressive 42% of return points in his career, compared to 37% for Federer).

What is their greatest match?

An exquisite level of play, a breathtaking scenario, an outcome at nightfall: the 2011 Roland Garros semi-final between Federer and Djokovic is a masterpiece. Djokovic was undefeated since the beginning of the year and had John McEnroe’s record (a 42 winning streak in a single season) in his sights. He even had 43 victories in a row straddling two seasons. Few were expecting a win from Federer, who played one of his greatest matches on clay and eliminated Djokovic in four sets (7-6, 6-3, 3-6, 7-6), finishing with an ace.

A breathtaking two hour-fifth set, and a result that will have far-reaching consequences in tennis history: the 2019 Wimbledon final is arguably one of the best matches the game has ever witnessed. In July 2019, Roger Federer was on track to become the oldest man in the Open era to win a Grand Slam singles title.

In the fifth set, Federer, noisily cheered by the Centre Court crowd, came back from a breakdown, then broke at 7-7 and got two match points at 40-15 on his serve. Novak Djokovic saved them and broke back. The two men then hold to 12 games all, where they must play a tie-break, according to the new rule introduced by Wimbledon organizers.

Both Federer and Djokovic entered this final as avengers. After going through the most difficult season of his career in 2013, Federer was back in a Grand Slam final for the first time in two years. Djokovic had not won a Grand Slam since the 2012 Australian Open. The Serb won a thrilling match featuring epic points: 6-7(7), 6-4, 7-6(4), 5-7, 6-4. Twice, in the first set tiebreak and at the end of the fourth set, Federer performed miracles. But he gave up his serve at the worst possible moment, at 4-5 in the fifth set.

The semi-final of the 2018 Rolex Paris Masters at the Accor Arena in Paris is probably the most iconic best-of-three sets the two champions played. Novak Djokovic won a close battle between two of the best indoor players in history: 7-6 (6), 5-7, 7-6 (3). The Swiss squandered 12 breakpoints and made some unforced errors in the final set tiebreak. As will be the case at Wimbledon seven months later, Djokovic was better in key moments.

Have a look at some of the most epic points between Federer and Djokovic on the ATP tour :

Federer vs Djokovic: Who is the best in Grand Slams?

In their Grand Slam encounters, Djokovic leads 11 to 6.

Roger Federer’s last Grand Slam victory over Novak Djokovic dates back to 2012 when he prevailed in the Wimbledon semifinals.

Roger Federer was born on August 8, 1981, while Novak Djokovic was born on May 22, 1987. Djokovic is thus six years younger than Federer and could well catch up with the Swiss for the most Grand Slams titles.

However, the length of Federer’s career is truly exceptional, and the Serb may not play until that age, although he claims to be inspired by the longevity of his Swiss rival.

Roger Federer and Novak Djokovic won their 17th Grand Slam title at nearly the same age: 31 years and 11 months for Federer, 32 years and 8 months for Djokovic. But Federer had to wait until he was 35 years and six months old to win his 18th title. 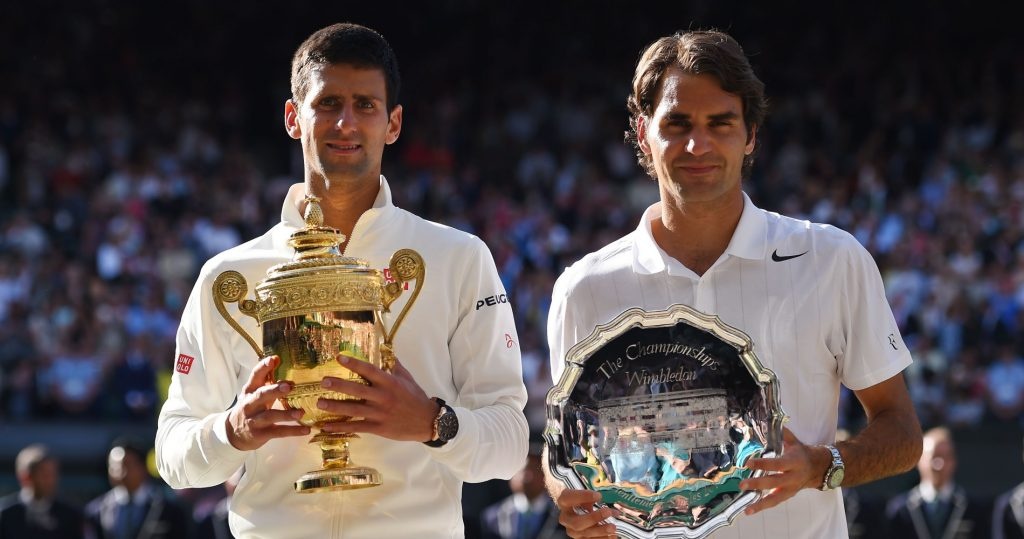 Who has the best record against Rafael Nadal?

Novak Djokovic has a better record against Rafael Nadal than Roger Federer.

(here the details of their matches on the ATP website)

Novak Djokovic dominates his head-to-head with the third member of the Big Three. He has defeated Nadal 29 times and lost 26 times (as of May 2020).

However, in Grand Slams, Novak Djokovic is 9-6 down.

(here the details of their confrontations on the ATP website)

Are Federer and Djokovic friends?

At a time when the media have grown increasingly powerful and the relations between the players have become more policed, Roger Federer and Novak Djokovic enjoy a respectful relationship. The Serb often expresses his admiration for Roger Federer. Recently, when his Swiss rival underwent knee surgery, Djokovic said, “Tennis needs Roger Federer”.

In an interview at Tennis World USA in 2019, Novak Djokovic expanded about his relationship with Roger Federer: “We have a very good relationship. We respect each other. Ok, we are not friends, we do not have dinner together. We are colleagues, rivals. It’s difficult to be friends when you compete on a court.” 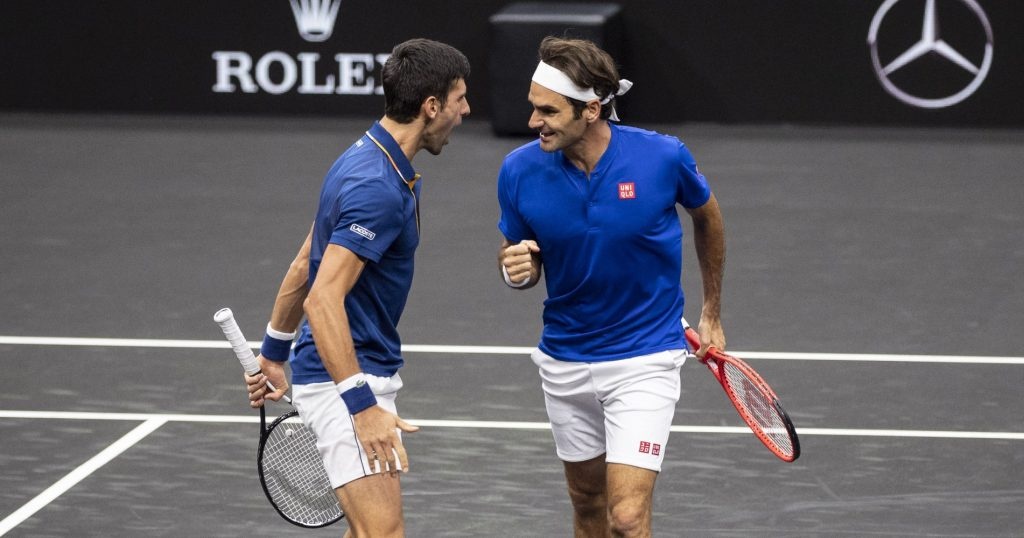 The two superstars sometimes showed off together at exhibitions. For example, they played doubles match together at the 2018 Laver Cup.

They also regularly exchange on social networks. In April 2020, during the coronavirus pandemic, Novak Djokovic responded to Roger Federer’s challenge to volley against a wall. Djokovic also publicly reported a WhatsApp group existed between him, Federer and Nadal, although the Spaniard later clarified that they were not the only three members.

Still, it seems that their relationship is not as good as the one between Federer and Nadal. Novak Djokovic’s father has publicly attacked Roger Federer several times. In 2013, for example, he told the Serbian daily newspaper “Kurier” that “Federer is an outstanding tennis player, but I couldn’t say that about his humanity.”. In 2020, Djokovic’s father unleashed against the Swiss for being “jealous” of his son.

At the beginning of Djokovic career, you could notice a sense of animosity between the two players, for instance when Federer criticized Djokovic’s retiring against Andy Roddick at the 2009 Australian Open.