Every day Tennis Majors takes you back in time to celebrate a great moment in tennis history. Today, we go back to 2008 to witness how Novak Djokovic, 20 years old, defeated Jo-Wilfried Tsonga in the Australian Open final to become the first Serbian player in tennis history to ever win a Grand Slam title 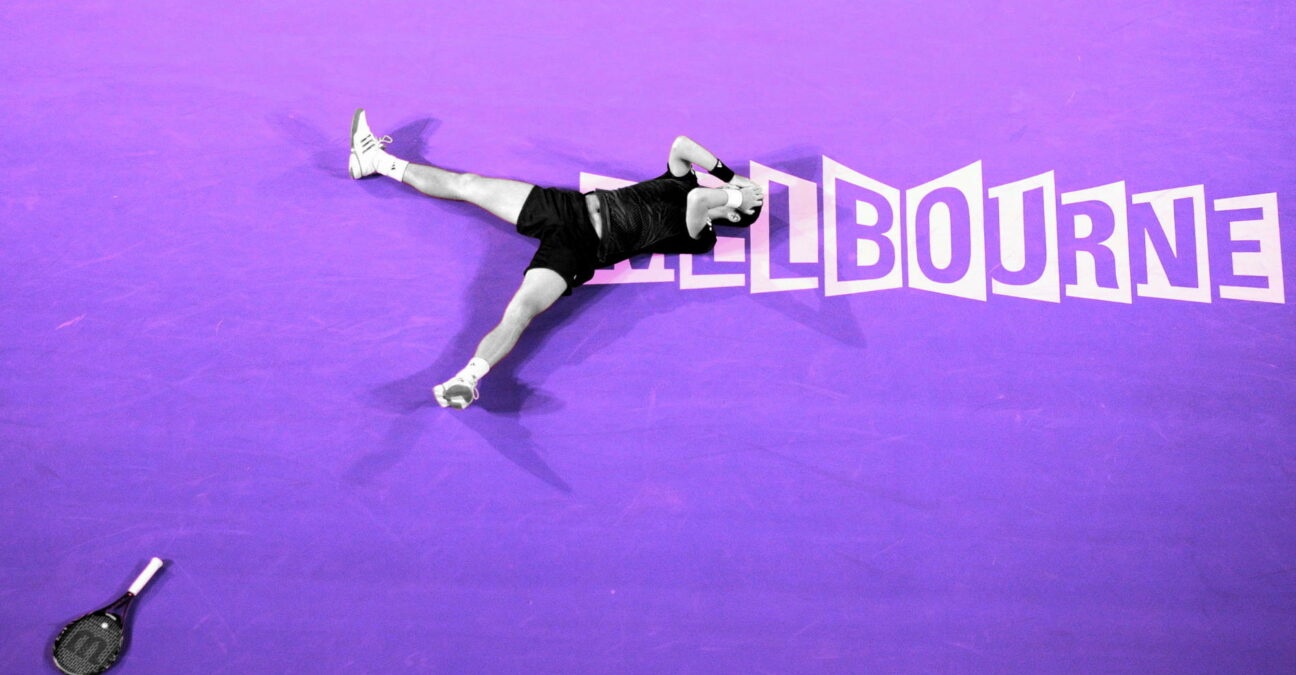 On this day, January 27, 2008, in the first Grand Slam final without Roger Federer since Roland-Garros 2005, Novak Djokovic, world No 3 and runner-up at the previous US Open, overcame the loss of the first set to beat unheralded Frenchman Jo-Wilfried Tsonga (who had stunned Rafael Nadal in the semi-finals) 4-6, 6-4, 6-3, 7-6 in the Australian Open final.

Although the Serb had defeated Federer in the semi-finals and some thought this tournament marked the start of a new era, it would take three years before Djokovic won another Grand Slam tournament and finally became world No 1.

Novak Djokovic was born in Belgrade, Serbia in1987. He entered the top 100 in 2005, finishing the year as world No 83. In 2006, he made himself famous by reaching the quarter-finals at Roland-Garros while being ranked only No 63, beating world No 9 Fernando Gonzalez in the second round. However, he was forced to retire after going down two-sets-to-love against Rafael Nadal.

Young ‘Nole’ never hid his great ambition. After he had to retire against Nadal, the Serb drew attention during his press conference with a pretty bold statement: “I felt like I was in control, everything depended on me,” he said. 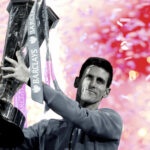 Djokovic finished 2006 as world No 16, but in 2007, he took his career to the next level. Defeated in the Australian Open fourth round by top-ranked Federer (6-2, 7-5, 6-3), he claimed his first Masters 1000 title in Miami, defeating Guillermo Canas in the final (6-3, 6-2, 6-4), after having taken his revenge over Nadal. Having reached the semi-finals at both Roland-Garros and Wimbledon, each time defeated by Nadal, he then made his way into the US Open final, where he was once again outclassed by Federer (7-6, 7-6, 6-4). Now ranked No 3 in the world, his next goal was obviously to lift a Grand Slam trophy in 2008.

Frenchman Jo-Wilfried Tsonga, born in 1985 in Le Mans, France, had been a very successful and promising junior player, winning the boy’s title at the 2003 US Open. Unfortunately, his early career was hampered by a severe back injury, and it was not until 2007 that he broke into the top 100. That year, his great run at the Queen’s Club Championships, where he qualified for the main draw and defeated Lleyton Hewitt, earned him a wild card for Wimbledon. Tsonga reached the fourth round at Wimbledon that year (defeated by fellow Frenchman Richard Gasquet, 6-4, 6-3, 6-4) and finished this first full season on the tour as world No 43. 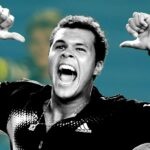 Unlike the other Grand Slam tournaments, the Australian Open (first known as the Australasian Championships and, later, the Australian Championships) had moved several locations throughout the years. In fact, the event switched cities every year before it settled in Melbourne in 1972, and no less than five Australian cities had hosted the event at least three times: Melbourne, Sydney, Adelaide, Brisbane and Perth. The event was held on grass at the Kooyong Stadium in a posh eastern suburb of Melbourne. Its position on the calendar had changed several times as well, between early December and January, going from being the first Grand Slam of the year to being the last.

Until 1982, many of the best players skipped the Australian Open, mainly because of the remote location and the low prize money, but with the triumph of Mats Wilander in 1983, the dynamic began to change. The tournament’s board made big efforts to make it as prestigious as the other Grand Slams, which ended up with the event moving to a new location, Flinders Park (currently known as Melbourne Park) in 1988, switching from grass to hard courts and unveiling the first-ever Center Court equipped with a retractable roof. Prize money increased as well, and it wasn’t long before the tournament became the favourite Grand Slam of many players.

Jo-Wilfried Tsonga had become the main attraction of the 2008 Australian Open. Almost unknown to the general public, the Frenchman, ranked No 38, had started the tournament by defeating world No 9 Andy Murray in the first round (7-5, 6-4, 0-6, 7-6). It was the first time that he celebrated a win with what would become his trademark “thumb dance”. In the following rounds, which included a win over his countryman Richard Gasquet in the fourth round, Tsonga, with his fighting spirit, became the crowd’s favourite, and made his way into the semi-finals, where he was to face Rafael Nadal. Against all odds, the Frenchman delivered one of the most stunning performances in the tournament’s history to destroy the Spaniard in straight sets (6-2, 6-3, 6-2).

After Tsonga had defeated Nadal, the Australian crowd hoped that he would face Roger Federer in the final, but the 2008 semi-finals had another surprise pending: the double-defending champion, who had reached the final of the 10 last Grand Slam tournaments, was defeated by 20-year-old Djokovic, 7-5, 6-3, 7-6. In this context, the Frenchman, whom the Australian public had already begun to gain favour.

Tsonga started strong, playing close to the standards he had displayed in the earlier rounds, and bolted through the first set, 6-4, breaking his opponent’s serve in the ninth game with back-to-back hot shots. Bursting with confidence, Tsonga seemed unstoppable – however, Djokovic didn’t give up and, little by little, he absorbed Tsonga’s power and took control of the match in the second set. The Serb’s consistency overcame the Frenchman’s brilliant shot making, and Tsonga, starting to show signs of exhaustion, found himself down two-sets-to-one (4-6, 6-4, 6-3).

Relying on his serve, Tsonga pushed Djokovic into a tiebreak in the fourth set, but the world No 3 finished strong to win the tiebreak 7-2 without much trouble. “Nole”, as one could read on his family’s t-shirts in the stands, fell to the ground, overwhelmed by the feeling of claiming his first Grand Slam title. Not only was he the first player outside of the Federer/Nadal duo to win a Grand Slam tournament since Marat Safin did so at the Australian Open in 2005, but Djokovic was also the first player from his country to win a Major title.

“I know the crowd wanted him to win more,” he said during the trophy ceremony, after having shown signs of anger at the crowd’s loud support for his opponent. “That’s O.K. It’s all right. I still love you guys. Don’t worry.”

“It was kind of a strange feeling,” he later explained, according to The New York Times. “It’s always dangerous to play against the underdog, the player who doesn’t have really anything to lose. He was really aggressive going for his shots from the start. That’s where I needed really to clamp down and keep my focus.”

What next? Djokovic wins 20 more Grand Slams while Tsonga continues to chase his first

After this first Grand Slam triumph, most of the experts thought that Djokovic could really disrupt Federer and Nadal’s domination. They were right – however, it would take the Serb another three years to win his second Grand Slam title. He did so in Melbourne in 2011, to kick off an incredible season during which he would claim three Grand Slam crowns, become world No 1 and lose only six matches throughout the season. 15 years later, at the start of 2023, Djokovic would hold 21 Grand Slam titles, tied with Federer and Nadal for the all-time record in men’s tennis, and would also hold the record of the longest reign as world No 1 with 373 weeks.

The 2008 Australian Open would remain Tsonga’s only appearance in a Grand Slam final. The Frenchman would reach world No 5 in 2012 and would reach the semi-finals in major events on five more occasions: at the Australian Open (2010), at Wimbledon (2011, 2012) and at Roland-Garros (2013, 2015). In 2014, he would achieve a very rare feat, defeating Djokovic, Andy Murray and Federer to triumph at the Toronto Masters 1000. Years later, in a interview for GQ Magazine, Tsonga would say that the 2008 Australian Open final could have changed his career: “I beat Djokovic five times in a row after that. But I lost that first match, that final. That match will leave me with regrets because winning a Grand Slam changes a lot of things. So there’s no point in talking about things that didn’t happen, but I feel like it would have made a huge difference.”

Tsonga retired at Roland-Garros in 2022. 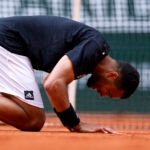