Not the best conditions for Nadal – Eye of the Coach #20

In episode #20 of Eye of the Coach, Patrick Mouratoglou talks about the conditions we might see at Roland-Garros this year, and why they may be challenging for some players, including the 12-time champion Rafael Nadal. 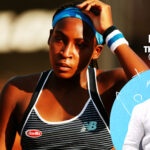 With Roland-Garros taking place in late September and early October in 2020, the shorter days and cooler autumn weather will make it a French Open like no other. The sun will set more than two hours earlier than it does in late May and early June and the chance for rain will be higher. All the ingredients could add up to slower conditions that might make it difficult for traditional clay-courters to find their game this year.

In the latest episode of The Eye of the Coach, Patrick Mourataglou talks about what type of conditions we might expect in Paris next week when Roland-Garros begins.

Roland-Garros in September and October?

“The conditions will be completely different because of the dates of Roland Garros,” Mouratoglou says. “The temperature will be lower, it’s going to be more humid, so the balls will be less lively than usual.”

Who will benefit, who will struggle?

“For Rafa’s topspin it’s also going to be more challenging,” he says. “One of the reasons that he is the ultimate clay-court player is because of the quality of his topspin, which is so difficult to control. It’s difficult to control because it’s explosive, and the ball is so explosive also because the courts are fast.”

Mouratoglou believes that Rafael Nadal will have to do more work tactically and with his defensive skills in order to continue to dominate on his beloved terre battue. He thinks that the conditions will be less than ideal for Nadal.

The coach of Serena Williams thinks it could help help the rest of the players contend with Nadal, which might make it a more interesting tournament than we’ve seen in years on the men’s side. He also believes that Dominic Thiem and Novak Djokovic have a great chance to contend for the title.

“It makes it more interesting because for the last 15 years there was not so much suspense at the start of the tournament, I think this year we are going to have a lot of surprises,” he said. “The preparation of the players is completely different, the weather conditions make this tournament a different tournament entirely, and we have two players that are at the top of their games, Dominic Thiem and Novak Djokovic.”