October, 12, 1994: The day Jeff Tarango pulled down his pants on court in Tokyo

Every day Tennis Majors takes you back in time to celebrate a great moment in tennis history. Today, we go back to 1994 to witness one of Jeff Tarango’s most famous antics which he says made even Michael Chang smile

On this day, October 12 in1994, Jeff Tarango, already infamous for his on-court behaviour, crossed another line, pulling down his shorts and waddling around the court in the midst of his second-round clash against Michael Chang, which he eventually lost (4-6, 6-3, 4-1, ret.).

The American left-hander Jeff Tarango was born in 1968 in Manhattan Beach, California. He had claimed two titles in his career. The first came in Wellington in 1991 and the second one in Tel Aviv in 1992, the same year he reached his best ranking on the tour (world No 47). He had never gone beyond the third round at a Grand Slam event, losing twice at that stage, at the 1989 US Open and at the 1993 French Open. Tarango did not carry a gentleman’s reputation. In his autobiography, Andre Agassi would later claim that Tarango cheated against him in a junior tournament, which the southpaw would deny. In October 1994, he was ranked No 78 in the world.

Michael Chang was born in New Jersey in1972. In 1987, at the age of 15, he became the youngest player to ever win a match at the US Open (defeating Paul McNamee). The following June, aged only 16 years and 3 months, he became the youngest player to enter the top 100 and reached the fourth round of a Grand Slam tournament for the first time, at the US Open where he was beaten by Andre Agassi. In 1989, he reached the quarter-finals in Indian Wells and the semi-finals at Forest Hills on American clay. These results helped him climb as high as No 19 before Roland-Garros.

There, in Paris, Chang stunned the tennis world by winning the title, and becoming the youngest male player ever to win a Grand Slam tournament. astonishment. He hit the headlines in the fourth round, when he upset world No 1 Ivan Lendl after coming back from two-sets-to-love down and overcoming cramps in the fifth set. In the final set, he got on Lendl’s nerves by making the unforgettable underarm serve and by pushing him to double fault on match point by waiting for his second serve just behind the service line.

Chang went on to beat Stefan Edberg in the final, defending 10 break points in the fourth set (6-1, 3-6, 4-6, 6-4, 6-2). The two years following his unexpected Grand Slam triumph were tough for Chang, who failed to establish himself in the top 10. By 1992, he had become a stronger and more aggressive player and re-entered the top 10 after winning three titles in February and March, at San Francisco, Indian Wells and Key Biscayne. In October 1994, the young American was ranked No 9 in the world. 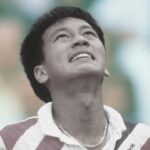 The place: The Yoyogi National Gymnasium in Tokyo

The Tokyo Indoor Open was held since 1978 at the Yoyogi National Gymnasium, famous for its suspension roof design. The tournament had been a part of the prestigious Grand Prix Circuit in the 1980s, and had been won by numerous great players such as Bjorn Borg, Jimmy Connors, Boris Becker, Stefan Edberg and Ivan Lendl (five times, in 1983, 1985, 1990, 1992 and 1993).

The facts: Tarango says he made Chang smile which is an accomplishment

On October 12, 1994, at the Tokyo Open, several top players were competing, and two of the top seeds had been upset: Boris Becker was defeated by Brett Steven (6-3, 6-4) and Sergi Bruguera had been eliminated by Tommy Ho (6-7, 6-2, 7-6). However, despite these big upsets, the player who received the most attention on that day was Jeff Tarango.

Who did the American upset to become the star of the day? No one. Tarango, feeling that the hold he had on his match against the ninth seed, Michael Chang, was fading away, created a stir as he pulled down his shorts and waddled off the court with his shorts around his ankles. The American, who had taken the first set (6-4), had just lost the second set and retired from the match during the third set because of an arm injury.

“I felt that I let the match slip away a little bit, and I wanted to make light of it,” said Tarango, according to the L.A Times. “I had exposed my weakness to Michael.”

Although he later apologized, the ATP Tour supervisor Gayle Bradshaw said he would consider the matter overnight and assess a fine within the range the tour allowed, which ended up being $3,000.

Years later, in an interview with sportswriter Scoop Malinowksi, Tarango recalled that as the “funniest moment” of his career:

“The time I was losing to Michael Chang and my racquet got caught in my pants string and I jerked it out and my pants fell down. In Tokyo. That’s a funny tennis memory because in Tokyo, they just weren’t ready for something like that. It was really, really hilarious. For a few days it was just a big hilarious joke. (…) It was the first time I ever saw Michael Chang smile on the court. So it was quite an accomplishment.”

What next? In 1995, Chang wins in Tokyo while Tarango loses it at Wimbledon

Less than a year after this incident, Jeff Tarango would make go down in tennis history – for the wrong reason. At the 1995 Wimbledon Championships, he became the first player to default himself by simply leaving the court, after having called the umpire Bruno Rebeuh “the most corrupted on the Tour”. His wife would later slap the umpire in the face in the All England Club alleys – an incident that would lead Tarango to be banned from Wimbledon in 1996.