Every day, Tennis Majors takes you back in time to relive a tennis event which happened on this specific day. On this day in 1995, Andre Agassi continued his self-declared summer of revenge by winning the title in New Haven 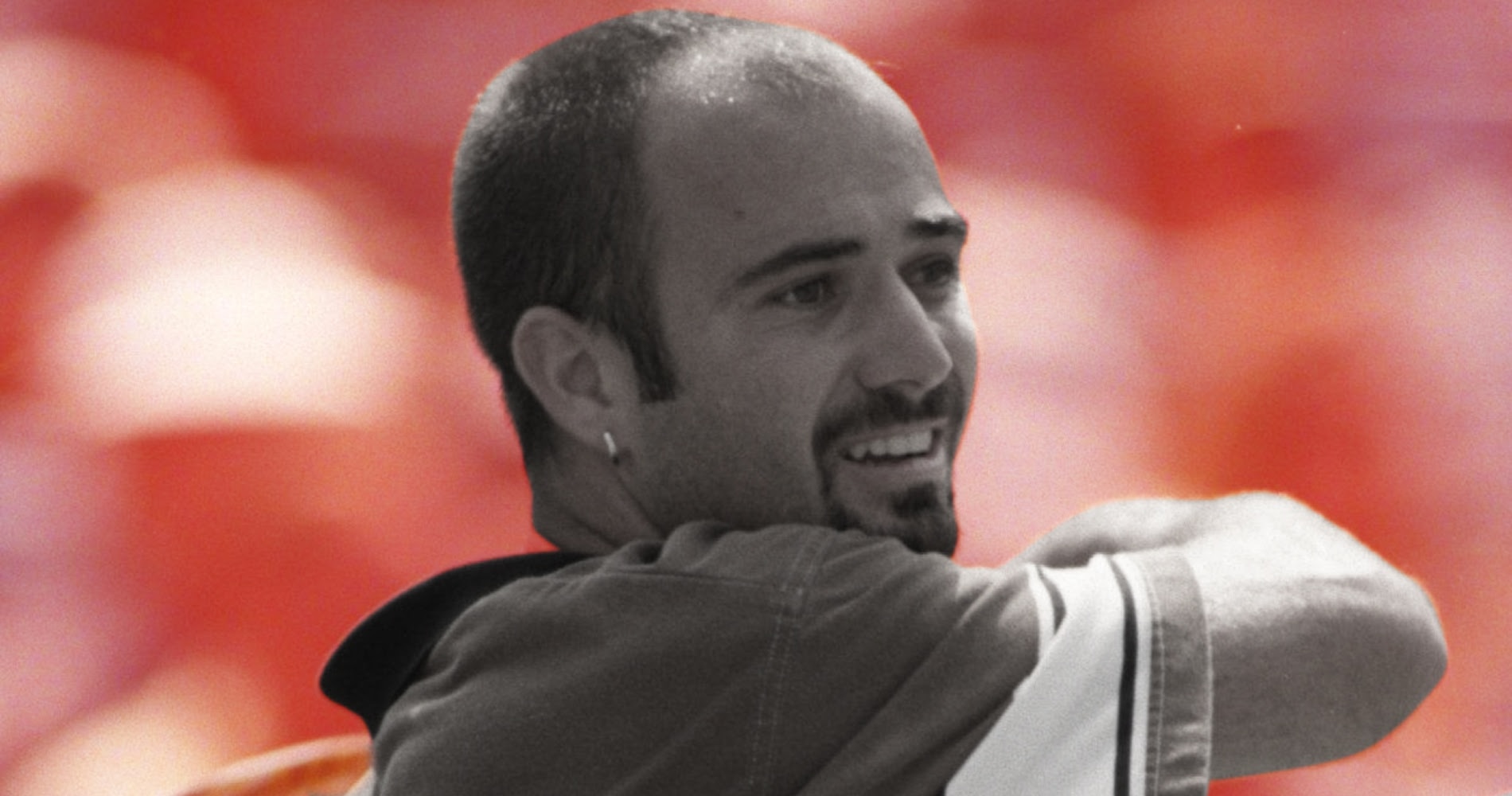 By triumphing in New Haven on this day in 1995, Andre Agassi claimed his fourth consecutive title, and remained undefeated in his post-Wimbledon preparation for the US Open. That year at the Championships, the Vegas Kid had suffered a disappointing loss in the semi-final to Boris Becker (2-6, 7-6, 6-4, 7-6), and shortly thereafter decided to make the following months his “summer of revenge.” After winning a first title in Washington, Agassi triumphed at the two North American Masters events in Canada and Cincinnati, and then won the New Haven crown after beating Richard Krajicek in the final (3-6, 7-6, 6-3) to become the clear-cut favourite for the US Open title.

Andre Agassi, the Vegas Kid, was one of the biggest stars in tennis history. He turned professional in 1986 and soon became famous, thanks to his amazing tennis skills and his flamboyant fashion sense, which included the iconic denim shorts and pink bike shorts (worn as an underlayer). Taught by his father and bred at the Nick Bollettieri Academy in Bradenton, Florida, Agassi’s game relied on a phenomenal return (the best of its time) and taking the ball on the rise off both wings with incredible power.

Agassi’s game style was considered revolutionary at the time and would soon be copied by the generations of tennis players that followed. In his early years, despite many great results, Agassi struggled to win the big titles. While his rivals were triumphing in major tournaments, Agassi missed his own opportunities. At the 1989 French Open, he lost to Jim Courier in the third round (7-6, 4-6, 6-3, 6-2) and witnessed countryman Michael Chang, 17 years old at the time, lift the trophy. At the US Open, he was stopped again in the semi-finals by Lendl (7-6, 6-1, 3-6, 6-1). In 1990, Agassi inched ever closer to a Grand Slam triumph, but, in the Roland-Garros final, he was defeated by an inspired Andres Gomez (6-3, 2-6, 6-4, 6-4). At the US Open, he finished runner-up to Pete Sampras (6-4, 6-3, 6-2). 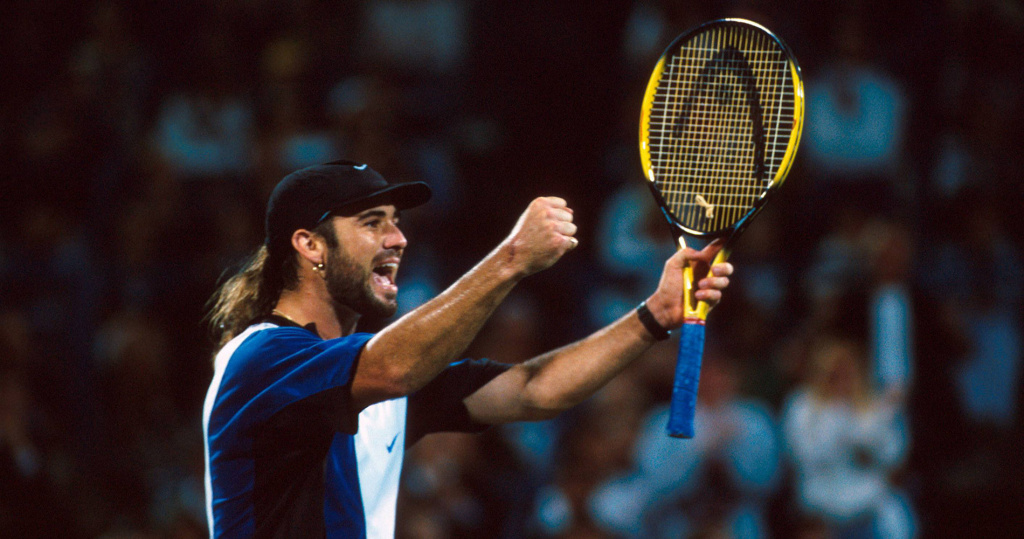 Once on top of the ATP charts, Agassi faced two Grand Slam disappointments, the first one at Roland-Garros, where he was eliminated by Yevgeny Kafelnikov in the quarterfinals (6-4, 6-3, 7-5), and the second one, the most painful, in the Wimbledon semi-final, where he lost to Boris Becker in four sets. Shocked by this loss and irritated by nasty comments made by the German afterwards, Agassi decided to start his “summer of revenge”. Following Wimbledon, he won all the three tournaments he entered – Washington, Montreal and Cincinnati.

Richard Krajicek, from the Netherlands, was born in 1971. He turned pro in 1989 and claimed his first ATP title two years later in Hong-Kong, defeating Wally Masur in the final (6-2, 3-6, 6-3). Krajicek had one of the fastest serves of his time, which he often followed to the net, and when he stayed at the baseline, he remained very aggressive, especially with his powerful flat forehand.

In 1992, he reached the semi-final of the Australian Open, but he had to withdraw due to a shoulder injury after a five-set win against world No 4 Michael Stich (5-7, 7-6, 6-7, 6-4, 6-4). The same year, at Wimbledon, he drew attention to himself by making a controversial comment regarding equal pay for women in Grand Slam events: “80 percent of the top 100 women are fat pigs who don’t deserve equal pay.” 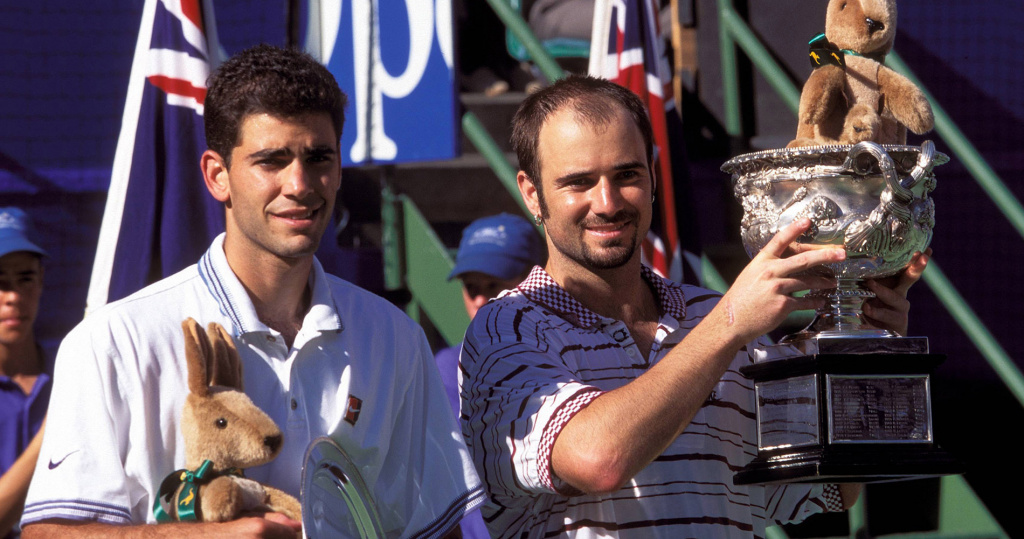 The Volvo International Open was founded in 1973. The event moved to several locations in the United States during its run: Bretton Woods, North Conway, and Stratton Mountain. Held every summer on hard courts, a couple of weeks before the US Open, it always attracted a top-notch field who would use this event to prepare for the last Grand Slam of the year. In 1990, the Volvo International set up shop in New Haven. Since then, the title had been claimed by champions such as Petr Korda (1991), Stefan Edberg (1992) and Boris Becker (1994).

When Andre Agassi arrived in New Haven in August 1995, he was no longer the player who had lost in the first round of the tournament 12 months earlier. Over that period, the Vegas Kid had claimed two Grand Slam titles, four Masters 1000s, and had held the world No 1 ranking since April. Despite this impressive list of achievements, Agassi, fueled by anger, wanted more. Since his semi-final loss at Wimbledon against Becker, his disappointment had changed into fury when he read Becker’s comments after their match. The German not only said that Agassi was receiving special treatment on the tour, but also added that he was not appreciated by the other players. Becker went as far as criticizing Agassi’s outfits: “I wouldn’t want my son wearing the things Agassi does.”

Along with his coach, Brad Gilbert, Agassi declared that the summer of 1995 would be his “summer of revenge”.

And so it was. Since then, Agassi had gone undefeated having claimed three trophies, including two Masters 1000s. When he topped Mats Wilander in the New Haven semi-final (6-3, 6-3), his winning streak extended to 19 matches.

Across the net stood Richard Krajicek. The big-serving Dutchman had been quiet on the tour since his triumph in Stuttgart in February but it was common knowledge that on a good week Krajicek could match any top 5 player. He had proven that already in New Haven by upsetting Becker, ranked No 4, in the quarter-finals (7-6, 3-6, 7-6), and Yevgeny Kafelnikov, world No 6, in the semi-finals (6-4, 6-4). If anyone was ready to stop Agassi’s revenge tour, it was him.

Krajicek got off to the better start. Consistently serving above 120 mph, he dictated the game and took the first set 6-3. In the second set, Agassi was broken at 5-5, and a few points later, Krajicek obtained a first match point thanks to a 128 mph ace.

“I felt like, ‘Yeah, I’m 130 mph away from game, set, match,’” Agassi commented later, according to The Los Angeles Times.

The Vegas Kid was saved by his returning skills and, thanks to a forehand passing shot, he eventually pushed the Dutchman into a tiebreak where Krajicek collapsed (7-2) before going down in the final set (6-3 ). Even though he had faced two match points, Agassi’s winning streak on his summer of revenge was now 20.

“I just got a little lucky, that’s all,” Agassi later said. “There’s no excuse for me to win this match. I was down match point twice against a guy serving bombs. … These weeks have given me a lot of confidence,” Agassi added. “My mind’s in shape, my body’s in shape, my game’s in shape. Now, all I have to do is to go to the US Open and take care of business.”

What happened next? Agassi would lose the US Open final

This loss, coming at the end of an incredibly successful summer, would leave Agassi drained and disheartened. Losing his motivation, he would not play much in the final months of 1995, letting Sampras reclaim the No 1 spot. In the following years, Agassi’s ranking would plummet dropping as low as No 141 in 1997.

Richard Krajicek would confirm his reputation as an elite player by winning Wimbledon in 1996. On his way to the title, in the quarter-finals, he would become the only man to beat Pete Sampras at the All England Club between 1993 and 2000 (7-5, 7-6, 6-4). His career would be interrupted by frequent injuries, but he would nevertheless reach No 4 in the world rankings in 1999.