Every day, Tennis Majors takes you back in time to relive a tennis event which happened on this specific day. On this day in 1974, Jimmy Connors became only the third player to top the ATP rankings On this day, July 29 in 1974, Jimmy Connors became world No 1 for the first time. in his career. ‘Jimbo’, as the American was fondly called, was the third player (after Ilie Nastase and John Newcombe) to sit on top of the ATP rankings, which had just been established in 1973. Connors. who was the first American to top the rankings, then became the first dominant player on the tour since Rod Laver achieved the Grand Slam in 1969, and occupied the top spot for 160 consecutive weeks, until he was knocked over in August 1977 by Bjorn Borg. Throughout his career, Connors would stay world No 1 for 268 weeks, a record which would remain unbeaten from until 1990.

Jimmy Connors, born in 1952, was one of the greatest tennis players of his time. Coached by his mother Gloria, Connors was one of the first few players to hit the ball flat and mainly from the baseline. Hitting the ball on the rise, his game would be very influential for future generations of tennis players. He was also known for his shocking on-court behaviour in the well-mannered world of tennis. While his mum loudly cheered for him in the stands, screaming “Come on, Jimbo!”, Connors displayed an unusual amount of aggressiveness, even in the way he encouraged himself. He was sometimes vulgar – giving the finger to a linesman or putting his racket between his legs in a crude manner. His constant quarreling with the officials made him infamous in a gentlemen’s sport. 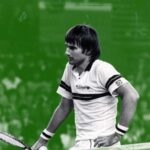 “Jimbo” turned pro in 1972, being one of the best hopes of American tennis, along with Harold Solomon and Roscoe Tanner. During his two first seasons  as a professional player, Connors managed to win 17 titles and reach the quarter-final round at the Grand Slams on three occasions. In 1974, he decided to play the Australian Open for the first time, a decision that proved to be wise as he claimed his first Grand Slam title in Melbourne, defeating Phil Dent in the final (7-6, 6-4, 4-6, 6-3).

It was the start of his greatest season. By July, Connors had already won 10 tournaments, including Wimbledon, where he had defeated the Australian legend Ken Rosewall (6-1, 6-1, 6-4) in one of the most one-sided finals in the tournament’s history. So far, his season had only been clouded by his ban from Roland-Garros because of his participation in the World Tennis Tour, which led him and his manager to file a lawsuit against the ATP.

After his triumph at Wimbledon, Connors had won 90 out of 100 matches over the past 12 months, and claimed 14 titles, including two Grand Slams. Hence, it was no surprise that, a few weeks after his title in London, Jimbo became the third player to be ranked No 1 in the world in the short history of the ATP rankings, after John Newcombe, who had occupied the spot for only 8 weeks, and Ilie Nastase (40 weeks).

What next? Connors would set a record that lasted 30 years

While Connors’ predecessor had held the No 1 spot for eight weeks, Jimbo himself would stay on top of the rankings for 160 consecutive weeks, until he would lose his throne to Bjorn Borg on August 23, 1977, for just one week before reclaiming it for another 84 weeks, until the spring of 1979. No player would remain No 1 without a break longer than Connors for 30 years, until Roger Federer beat that record with a 237-week reign.

In 1974, Connors would also triumph at the US Open, totally outplaying 39-year old Ken Rosewall in the shortest Grand Slam final of the Open Era (6-1, 6-0, 6-1), thus remaining unbeaten that year at the Grand Slams. If he had not been banned from the French Open, Connors could possibly have written an even more impressive chapter in the history of the sport.