Italy’s Lorenzo Musetti has captured the imagination of tennis fans with his stylish game and abundance of creativity. To keep rising up the rankings he’ll have to prove he knows which weapons to choose for the fight 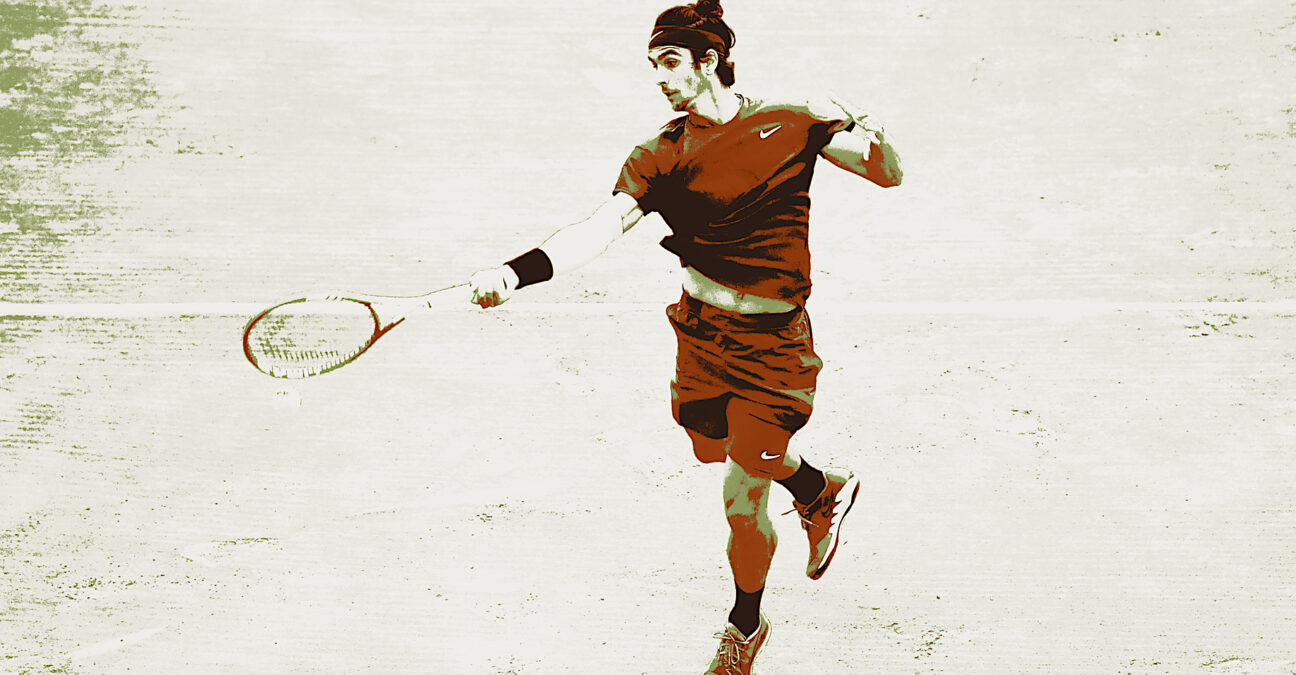 Artistry in every corner, a backhand to die for and a well-rounded game crafted from creativity and spontaneity. The 19-year-old Lorenzo Musetti packs a punch that is pure oil on canvas, especially when juxtaposed with today’s relatively robotic Next Gen counterparts.

The results are coming thick and fast, as he’s shown this week, with wins over Felix Auger-Aliassime and Sebastian Korda taking him through to the quarter-finals of the ATP event in Lyon. With a unique brand of silky smooth, aesthetically-pleasing tennis, Musetti shines on court, like a crazy diamond.

“I enjoy when he plays following his instincts,” his coach Simone Tartarini tells Tennis Majors. “When I see Lorenzo playing, for me, it is like seeing an old tennis player, from another era.”

Koenig: “This guy has so many tools at his disposal”

In his brief professional career (he played his 20th ATP-level match last month in Barcelona) Musetti has already demonstrated a keen ability to keep his opponents off balance with variation and ridiculously feathery drop shots, which he can produce with breathtaking feel and stunning accuracy.

“Certainly we’ve seen how effective it is in the juniors, and so far in the senior game it’s been fantastic, I don’t think he has overused it,” says legendary commentator Robbie Koenig, former ATP player and currently anchoring Amazon Prime’s coverage of the ATP Tour. “This guy has so many tools at his disposal.”

The drop shot isn’t the only jaw-dropping shot in Musetti’s arsenal.

“He’s got a good serve – still could be improved – the forehand is brilliant, the backhand, he shapes it nicely, he’s got the rocket down the line, great feel,” Koenig said. “And most of all he’s not scared to finish points up at the net.”

Nishikori: “The backhand surprised me”

Kei Nishikori, who was taken out by Musetti at Rome last year, told Tennis Majors that there is a lot to like about the Italian’s sparkling game.

“He hits very heavy, from both sides,” Nishikori said. “I was surprised with his backhand, how he can penetrate the ball from the back.”

Nishikori also pointed out that Musetti, a natural clay-courter who grew up on and favours the red clay, is also proving to be a force on the faster surfaces.

“He also surprised me by playing good tennis on the hard court,” Nishikori said. “For sure he can play, he can beat anyone on clay, but I saw him playing good tennis in Miami [and Acapulco], last couple of tournaments on hard court, so it was good to see, he can play all the surfaces, I don’t know grass, I haven’t seen, but I’m sure he’s going to be good, and he has good potential.”

The big challenge for Musetti? Choosing the right shot

Koenig says that the challenge of solving the ATP’s top players might prove to be difficult in the short term for Musetti, because the Italian has so many tools at his disposal and he’ll have to put a lot of tactical work into finding what shot will work best against each player in each situation. Meanwhile, another rising teenager, Spain’s Carlos Alcaraz, will have a simpler task, simply because his game style is much less dimensional.

“I think he’s probably one of the most complete players out there right now,” Koenig says of Musetti, before adding: “I think Carlos is a fantastic competitor too, but I don’t see the same sort of skill set, but could that be a blessing?”

Koenig believes that Alcaraz might benefit, at least in the short term, from having fewer options.

“It could be that the decision-making becomes easier, because you don’t have this many options at your disposal,” he says. “And I always think about somebody like David Ferrer. What we call talent and what we see as that visual beauty, he didn’t really have that, but his decision making was so simple: ‘I hit my backhand crosscourt 95 percent of the time and I’m not going to change direction because that’s difficult to do, but when I get a forehand, I’m going to do whatever I want and I can run all day long.’”

Musetti in his own words

After speaking with Koenig about the talented Italian, it made sense to ask Musetti himself about his own game. Did he sometimes feel that he had too many options? Is it difficult to know when to pull out a specific tool from his big back of tricks?

Musetti says that he plays his best tennis when he simply lets it flow. He’s like a jazz musician riffing on a solo, or an improvisational dancer that makes the moves up as he goes along.

“Yes, when I have sensations on the court, for me it comes like natural, to play and to do drop shots and all the shots, tricks, whatever, you can call, like variation, and stuff, it’s I think it’s one of my best assets, and I think sometimes it’s the key of winning matches in tough conditions,” he says.

Koenig, like the rest of us, is intrigued by both talents, in addition to the other hot and rising Italian teenager, 19-year-old Jannik Sinner.

He pictures them a little like a NextGen Big 3: “I see a Musetti as a young Federer with the whole skill set, I almost see Alcaraz as a bit of a Rafa, the right-handed version, this brute power guy that plays so well on a clay-court and then Sinner is almost the hybrid of both, maybe he’s the Djokovic version, can rip the ball off both sides, serves very well, moves like a gazelle around the court, so I think tennis is going to be blessed with some more diverse rivalries going forward.”

Grand Slam champion Marin Cilic has faced both Musetti and Alcaraz, and was happy to make his own comparison of the two players for Tennis Majors:

“They are just a bit different styles, between Lorenzo and Carlos,” Cilic said during a press conference last month in Estoril. “Lorenzo likes to play a little bit further away from the baseline, he likes to open up the court, uses angles, has got really good touch, he’s got also a one-hander, plays slice and I think clay is his favorite surface, already last year when we were in Rome, he beat Wawrinka, he beat Nishikori, last 16 that he made.

“He showed great tennis already. And in that sense I feel that he is just maybe half a step in front of Carlos. Carlos is just getting onto the tour and has a bit of a different game. Carlos is playing more aggressive and also trying to attack, putting a little bit more pressure on the opponent. I think both of those games that they have can improve a lot.”

Musetti knows how to win at 19

Shotmaking artistry and creativity aren’t the only weapons that Musetti possesses. He’s also demonstrated a keen capacity to deliver on the big stage. We saw that in 2020 when he topped Nishikori and Stan Wawrinka in Rome, and again earlier this season when he reached the semi-finals at Acapulco with wins against Diego Schwartzman, Frances Tiafoe and Grigor Dimitrov. A few weeks later, on the clay, he saved four match points to defeat Dan Evans – further proof that he can thrive under pressure.

I love his demeanour on court. Doesn’t get too high, he seems very even-keeled. Perhaps out of everything that might be the thing that attracts me about him the most.

Koenig says that starting his ATP career with so many clutch performances can set the tone for his whole career.

“I think that’s so important when you’re young, if you are delivering,” he said. “He saved four match points in Sardinia against Dan Evans for example. I’ve watched him serve out some close matches, we saw the run he had in Acapulco, how many tight matches he fought through, so I think at some point early on in a career to grow your belief that you belong at the highest level – not only belong there – but you can win in tight situations. And I think that’s going to hold him in such good stead, certainly moving forward in the next two to three years, coupled with his composure that we spoke about.”

Room to improve: what’s next?

Musetti has plenty of room – and time – to improve his game. Tartarini says they would like to focus on the return of serve.

“We must improve the return and he must play near the baseline, these are our goals for the future,” he said.

Tartarini, who has coached Musetti ever since he was a junior, says that his charge must also develop his mental game and, most important, gain more experience on tour. “Personally I think that Lorenzo has just learned to play as a top player, yet he must learn the top player’s mentality. Now, for Lorenzo the most important thing is to play as many matches as possible in order to improve the mentality, the results will come later. Lorenzo has a good technique yet it is important to learn when and how to use his weapons.”

Koenig would like to see Musetti’s first serve gain a little more bite.

“It’s the first serve for me,” he says. “I think guys who traditionally grow up playing on a clay court tend to hit a kicker first serve a little too often and while that’s not always the case I’d still like to see him get a bit more pop from his serve and go for it. Even if that first-serve percentage drops, I don’t mind, if he’s getting more free points on the serve. So I want to see him continue to hit buckets and buckets of serves because that is the most important shot in the game. Technically it’s very good, but I think it’s important that his mindset doesn’t become: Just a kicker and then start the rally serve.”

Perhaps he can take the backhand earlier more often as well, says Koenig.

“From deep in the court when he makes time for himself, he’s fantastic, but I also want to see him complement it with taking a shorter backswing and maybe taking a backhand on the rise.”

There aren’t many deficiencies in Musetti’s game. At 19, he seems to have all the tools, all the panache, and an uncanny knack to meet the moment with his best tennis. Time will tell if he’ll ever produce the results to match his potential, but already, at 19, he’s proving that he’s ahead of the game.

His first Grand Slam main draw appearance, on his favourite surface at Roland-Garros later this month, will be a great opportunity for Musetti to show the world what he’s made of. Whether he wins or loses, it is sure to inspire.