In a Tennis Majors exclusive, Stefano Vukov, the Croatian coach of Wimbledon champion Elena Rybakina, says this is not the last time we will see her on the biggest stage 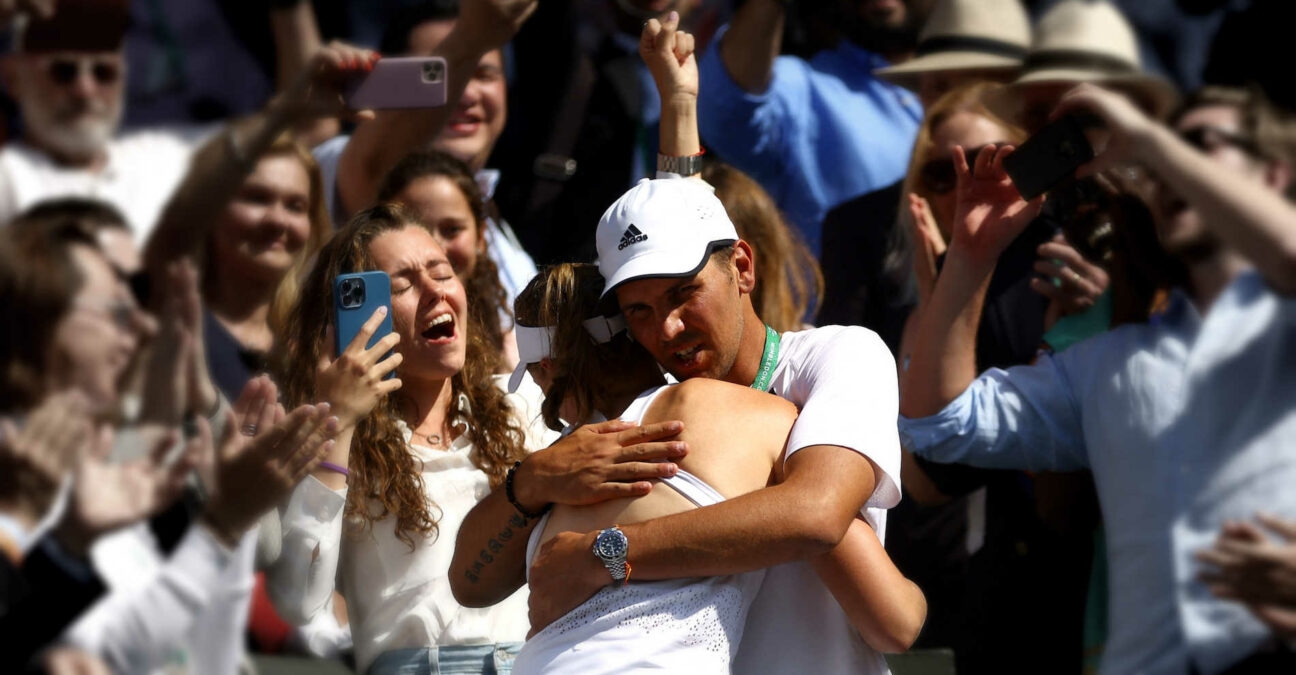 A lot of people on the Wimbledon balcony came just to shake his hand and to congratulate him. He was shining with pride – as he should, because Stefano Vukov is the coach of the 2022 Wimbledon champion.

As we spoke, the runner-up Ons Jabeur came to congratulate him and even hugged him. “She is a great girl, Ons,” Vukov said.

Born in Rijeka, Stefano did not spend much time in Croatia – his parents moved because of the war. He spent 15 years in Italy and played at Futures and Challenger level, but not for too long, as he went to college in Miami, only to finish his studies in Italy.

Ukrainian Anhelina Kalinina, world No 34 at the moment, was the first player Vukov coached. “She is a very good player and a very nice girl”.

Anhelina introduced him to Rybakina, with whom he started to work at the beginning of 2019. Three and a half years later, Elena is a Grand Slam champion having beaten Ons Jabeur 3-6 6-2 6-2 in the Wimbledon final.

Tennis Majors: What everybody wants to know is – what clicked here?

Stefano Vukov : My energy against her calmness! Elena is a great girl. I was looking for a player who really wanted to listen and to improve. I found this in Elena, and she found in me a lot of information and a lot of energy. It is not that easy to click with a player, you need to understand her really well. Many things came together here, but with her style of game, I understood what she had to do from the first time I saw her.

Tennis Majors: Could you go into a bit more detail on that?

Stefano Vukov : I thought that she could serve much better and to become a more aggressive player, with intent to come a bit more to the net, which is something we are still working on. She does not have enough confidence for now. She is an aggressive baseliner, we both understood this. We developed her belief in the past few years.

Game-wise, we made the biggest change on serve. We completely altered the motion: we made it more shortened and efficient, as well as the ball toss. And Elena went from not that many aces to having the most aces on the WTA tour. Also, it is about intent – now she wants the serve not to come back, she is not serving just to start the point. I think she wrapped her head around that in the past few years and she is now aware that she can get a lot of free points like this.

Tennis Majors: You mentioned belief, but how does one work on belief?

Stefano Vukov : It is hard to quantify it until you are actually in that position to play quarter-finals, semi-finals or finals. When you achieve these results, it has a positive effect and your confidence grows. The key is to understand that you need to work hard – there are no secrets, no magic tactic solutions. Just try to improve all the time and results are bound to come.

Elena is a hardworking perfectionist, which sometimes works against her, because sometimes she gets frustrated when things are not perfect.

Tennis Majors: Is Elena as calm outside the court as she is on it?

Stefano Vukov : Yes, she is very calm. That is her personality since she was a kid and you do not change personality. Elena is a hardworking perfectionist, which sometimes works against her, because sometimes she gets frustrated when things are not perfect.

Tennis Majors: Did she go crazy in the locker room at least?

Stefano Vukov : No. I think it takes time for everything to settle in and for her to understand what she has done in this sport, for herself, for your team and people that believed in you, for your country… It is beautiful. 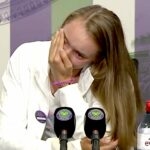 Tennis Majors: What was the key moment during this tournament?

Stefano Vukov : It is always tough, you have to prepare for every match and try to be ready as much as possible. I started feeling that Elena was getting better and better in the quarter-finals against Ajla Tomljanovic, although she lost the first set. During that match and afterwards, she started to believe that she actually has the chance to win the title.

Tennis Majors: Before the tournament, did Elena believe that she could do something big here?

Stefano Vukov : Actually – no, because we were going through a rough patch. Elena caught Covid earlier this year and she had a really tough couple of weeks. She lost a lot of weight, muscle mass and it took her a lot of time to get back. She came back in the Indian Wells tournament and played in the quarterfinals, but she was running on adrenaline. Also, we had some issues with the foot at the beginning of the year, but we managed to fix everything. Here we are now – Elena won one of the biggest titles in the world! She made it and I am immensely proud of her and extremely happy.

For those of us who come from Eastern Europe, we always have to fight against the windmills and to push through. She is used to it, I am used to it.

Tennis Majors: The match today against Ons Jabeur, what was crucial?

Stefano Vukov : Managing emotions, definitely. First Grand Slam finals for both of them, so I expected them both to be nervous. We expected that Ons was going to fight every point, to try to make Elena play extra balls and to stretch her to the outside with chips and slices. Key for Elena was to serve well. First serve was not there too much, probably because of the nerves, but she found stability from the baseline – she was patient, but went for it in the correct moments. It turned out well.

Tennis Majors: We brought up Elena's calmness. Do you think it works in her favour for what is to come after a big title like this?

Stefano Vukov : Absolutely. On the other hand, we have always been the underdogs. It is not like Emma Raducanu – when she won the US Open, the whole nation started to push her, she is from Great Britain after all, the marketing is different and all those things. For those of us who come from Eastern Europe, we always have to fight against the windmills and to push through. She is used to it, I am used to it.

Tennis Majors: What was your main input before the final, how did this day look like?

Stefano Vukov : Like any other day. We kept it simple, went match by match, just like in any other tournament and any other round. Yesterday we tried to prepare for Ons’ style of play, but today we just kept it light and happy. She was very nervous before the match, but I told her that it is fine: ‘Just go for it, the nerves are there for you, but for her as well’.

I know it is a big stage and a big moment, but at the end of the day, it is another day in the office for her. She needs to understand that she has the quality and the level to be at this stage more than once in her career. You have to be happy, to give yourself credit, but also to stay who you are.

Tennis Majors: And how are you as a person?

Stefano Vukov : I am most definitely not calm! We have been through some similar moments, although not as big as Wimbledon finals. I try to give everything I can to my player, to adapt to her as much as possible, but as well to try to push her even when she does not want to be pushed. There has to be some chemistry, and now we are both happy that I pushed. I have been through a rollercoaster of emotions at the Olympics and some other finals, here I almost felt like I was too calm, especially in the last few days. Probably I just left it in the hands of destiny.

Tennis Majors: What are you going to emphasise in the post-Wimbledon period, particularly from an emotional and mental perspective?

Stefano Vukov : From my coaching experience, especially on the WTA Tour, when you get to quarters of a Slam, anything can happen and anyone can win. It is about who handles the emotions better. Once you have been through that a few times, you start thinking more about other important stuff during the match. You are no longer thinking: ‘Oh, my God, I am stressed’, it is more like ‘What I have to do?’ Definitely, this experience showed her that she belongs here and I think it will help her to perform even better the next time.

They have been great to her and they have helped her very much. I am sure she feels very Kazakh at this moment.

Tennis Majors: Elena got a lot of questions about Russia-Kazakhstan and the politics of this whole situation. How was she capable of not letting it get to her?

Stefano Vukov : When she changed nationality from Russian to Kazakh back in 2018, basically the same things happened, similar questions, only from a different side. She is used to this. As I said earlier, we are used to controversial questions, but to be honest, I do not know what everybody is digging for? At the end of the day, these are tennis players, the flag does not matter, we are here to enjoy and to see some great tennis. She handled it well, because she had expected it.

Elena has a long history with the Kazakhstsan Tennis Federation, the president of the federation was here today to support her, the minister of finance as well. They have been great to her and they have helped her very much. I am sure she feels very Kazakh at this moment. 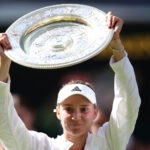 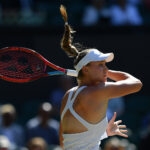 Rybakina: a serve “as fast as Djokovic” and an aggressiveness that is expressed “in many different ways”
tennis majors 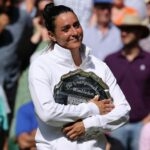 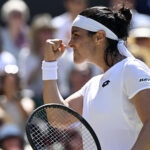