After beating Coco Gauff in straight sets on Wednesday evening, Sloane Stephens gave her opinion on ‘bathroom breaks’ – the hot topic in the first week at the US Open

One of the biggest stories emerging out of the first few days of the US Open has been the controversy around toilet breaks, brought into the spotlight by the long bathroom break taken by Stefanos Tsitsipas during his first-round encounter against Andy Murray.

After going down in five sets to the Greek player on Monday, a visibly frustrated Murray was seen cursing and lashing out at the situation on court while he packed his bags and walked off the Ashe Stadium. Later, Murray spoke his mind in his press conference and also took to Twitter to air some of his thoughts on the situation.

On Wednesday evening, former US Open champion Sloane Stephens was asked about the same in her press conference following her straight sets win over countrywoman Coco Gauff.

Stephens admitted that she had not watched the particular incident during the Tsitsipas vs Murray match but she did agree that several players, including on those on the WTA Tour, used the toilet break as a gamesmanship strategy.

“I honestly just thought Andy’s tweet was really funny. I didn’t see exactly what happened. I’m not sure. I just thought it was hilarious. We all are like huge Andy fans. We love him.”

“I can’t speak for what happened in that match, but I do know on the girls’ side, there still is a lot of that. It’s gamesmanship,” Stephens continued. “I think there definitely needs to be a rule or changes. They make a lot of rule changes for smaller things, they took one minute off the warmup. If someone goes to the bathroom for nine minutes, no one says anything. There’s so many little things that can be changed and looked at. I think that hasn’t been done. I think now that there is a lot of talk about it, people come into press, people tweet about it, whatever, maybe it will get a little bit more attention, that gamesmanship will kind of maybe turn and change a little bit.” 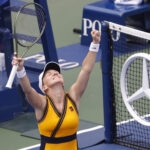 “Do you need help? I can come help you” – Stephens on her thoughts when opponents take a long bathroom break

Stephens was asked whether she would like a cap on the maximum time that can be allowed for a bathroom break as many had recommended. The American responded that while it may be hard to determine the right time, a break of six minutes or more may be unwarranted and could completely change the momentum of the match.

“I don’t think you should be gone from the court for, I don’t know – six, eight minutes is a long time to leave a match. That changes the whole momentum of a match. If you’re changing your clothes, what are you changing? What are you doing in there?.” Stephens said.

“I think there was a rule a couple years ago where girls could only – it was like a three-minute rule or something in the bathroom. If you ever changed out of a wet sports bra, which I don’t think you have, you wouldn’t know how difficult that is. But that is maybe like a five-minute (break). When you get into six, seven, eight, nine minutes, okay, what are you doing in there? Do you need help? I can come help you. Like, what’s happening? I think that’s more where the issues are because it just becomes pure gamesmanship.”

Stephens will next meet either former champion Angelique Kerber or Ukraine’s Anhelina Kalinina, whose match was postponed to Thursday due to the rain. 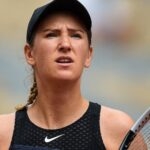